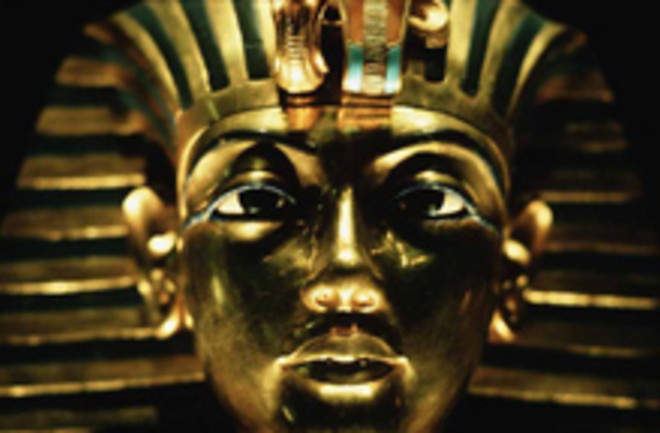 Once again, to the bane of myth-makers and fans of historical intrigue, the simplest explanation may be the best: Scientists analyzing the DNA of the world-famous mummy of Tutankhamen say that he wasn't done in by murder nor any of the exotic diseases put forth as explanations for his death at the age of 19. Rather, they say in the Journal of the American Medical Association, it was likely complications of malaria that killed King Tut, who was already frail thanks to royal inbreeding. The team led by Egypt's top archaeologist, Zahi Hawass, spent years taking CT scans and conducting genetic tests on mummies from the royal tombs. They say they confirmed that Tut was the son of Akhenaten, which is what scholars have long believed, but it hints at something else:

Pharaohs were thought of as deities, so it makes sense that the only prospective mates who'd pass muster would be other deities [AP]

. Unfortunately for King Tut, that incestuous tradition made him more susceptible to degenerative bone diseases. He may have had Koehler’s disease, as well as a club foot. Earlier discoveries had hinted at Tutankhamen's frailty, including the 100-plus walking sticks that Howard Carter found when he unearthed the tomb in 1922.

"This is confirmed by images that show him sitting while shooting an arrow, which normally would have been done standing up," says Hawass. "He cannot stand" [TIME]

. The researchers also found that Tut and his family were infected by a parasite that often brought with it a virulent form of malaria. If the young Tut was already frail and had a weakened immune system, a malarial infection could have been life-threatening, the team hypothesizes. Not everyone buys the parasite bit, however, including parasite scientist Sanjeev Krishna.

“If you have the parasite and you get to the age of 19, the chances are you’ve developed some kind of immunity,” he said [The Times]

. But while a sickly minor king who could barely walk isn't exactly as romantic as the King Tut of popular culture, James Phillips of Chicago's Field Museum of Natural History says we shouldn't expect the emerging facts to crush the myth.

"Reality is reality, but it's not going to change his place in the folk heroism of popular culture," Phillips said. "The way he was found, what was found in his grave — even though he was a minor king, it has excited the imagination of people since 1922" [AP]