What it means to be a Turk

In the 19th & 20th centuries with the emergence of nationalism and its various scholarly subsidiaries in archaeology, philology and ethnography quite a few pan-ethnic movements rooted in language were born. Pan-Slavism, the Greater German idea (Grossdeutsch) and Pan-Arabism come to mind. As evident in their names these ideas shadowed relationships of language, but they often veered into racialist territory. In The History and Geography of Human Genes L. L. Cavalli-Sforza reported a substantial overlap between phylogenies generated from classical autosomal markers, and those of linguistic family trees. But obviously there were deviations on the margins, sometimes substantial ones. Pan-Turkism is an idea which came to the fore after the collapse of the Ottoman Empire, though its roots go back to the 19th century. The role of a Turkish nationality was essential in the creation of the modern Turkish state by Kemal Ataturk. Though the Ottoman Empire had a Turkish speaking rule class at its heart, it was not fundamentally an ethnic polity. The Ottoman Empire was far less Turkish than the Hapsburg Empire was German. The Ottoman bureaucracy and military was open to many ethnicities, though often conditional on conversion to Islam. Albanians and Slavs played an important role in the Ottoman military, while the Janissaries were famously recruited from Christian subject peoples. Ataturk aimed to replace this ethnically cosmopolitan but religiously Islamic Ottoman identity with a Turkish secular one. To a great extent he was successful, though not fully. Because of the vogue for racial theories in the early 20th century the new Turkish government naturally did fund research which purported to illustrate the distinctions between the Turkish peoples who had settled Anatolia and Southeastern Europe after the year 1000, and the native Greek, Slavic and Armenian populations. There is of course a natural problem with this: the basic origin of the Turkic peoples in Western Mongolia and the trans-Siberian steppe is well known, and Turkic speaking peoples still reside in that region, and physically they do not look much like Anatolian Turks at all. In fact there is a clear cline of Mongolian to European appearance from Central Asia to Anatolia. Of course common sense is often too easy to brush aside, and Pan-Turkish theories still seem to presuppose ideas of common ancestry. This is where genetics come in. There have been several recent papers on attempting to adduce the relationship of Anatolian Turks to peoples of the Balkans and Central Asia, but generally they have utilized uniparental markers, mtDNA and Y. Alu insertion polymorphisms and an assessment of the genetic contribution of Central Asia to Anatolia with respect to the Balkans uses 10 alu elements to estimate admixture between these putative parental populations: 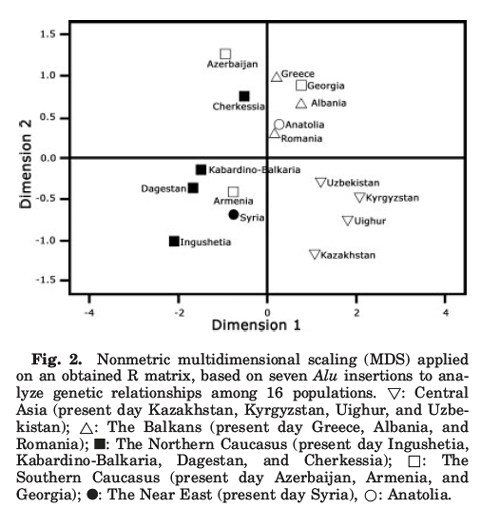 As noted in the abstract it is important to remember that Anatolia has among the longest histories of settled agriculturalists in the world. Population estimates suggest nearly 12 million residents during the late Roman Empire. Though I am skeptical that the population was nearly so high during the early medieval period, even if it was 1 million that would be substantial. There is an asymmetry between the two source populations as farmers tend to greatly outnumber nomads. Also remember that the positions of the Central Asian groups are likely closer to the Anatolian Turks than would be from Turkic populations closest to the ancestral homeland. The Turkish expansion occurred late in history, after the fall of the Roman Empire, but before the rise of Islam. Groups like the Huns and Avars who ravaged Central Europe during Late Antiquity were likely Turks, or had Turkic speaking peoples as part of their hordes. The famous Khazar Jews were also Turks. Turks took refuge among the Magyars after the expansion of the Mongol hordes. It is the last event which obscures the Mongolian origin of the Turks. The Mongols were a minor tribe on the northeastern fringes of what is today Mongolia before the rise of Genghis Khan. Western Mongolia was dominated by Turkic groups, and this was the likely point of departure for many of the earlier expansions. The Uyghurs, East Turks south of the original homeland are themselves highly admixed with a "Western" element which was indigenous to the region prior to the Turkish migrations. The question then is why some regions became Turkic speaking, as Anatolia and northwest Iran did, and others, such as Iran, the Volga region and the Balkans, did not. There is no point in offering a one-size-fits-all explanation. But in the vast regions of Western Eurasia where the Turks did settle, and were genetically assimilated by the far more numerous sedentary populations, there are some instructive differences. In the Persian world the Turks arrived during the early Islamic period as mercenaries and slave soldiers. They converted to Islam and identified with the world of Islam, and accepted from the Persians their high culture. From the year 1000 Turkic elites ruled Iran up until 1900 except for the Mongol interlude. This left an impact, as 25% of Iranians are Turkic speaking, and Azeribaijan is predominantly Turkic. But they came as cultural supplicants. Iran retains its ancient name. Turkey does not. Not so when the Seljuks and Ottomans pushed into Anatolia, and later the Balkans. Here the dominant elite language was identified not just with a conquered population, but with an identity, the Greek Orthodox Christian one, which was a rival to the Turks' own self-conception as Muslim warriors, ghazis. The Ottomans encountering the Greeks of Anatolia already had the accoutrements of high culture, and demanded conversion to their religion for easy advancement into their power structure. Obviously being a Muslim did not entail speaking Turkish, as it is Ottomans elites cultivated poetry in Farsi, the language of Persia. But in Anatolia and the Balkans to become Muslim did in the end signal that one had turned "Turk." Russia serves as a reverse example. During the 17th and 18th centuries large swaths of the Ural and Volga region were conquered from Turkish Muslim tribes. In the course of history a substantial number of these populations were Christianized, and Christianization was compulsory for the admission of Turkish elites into the boyar class who served the Czars. Though there are still Turkish Orthodox ethnicities in Russia, it seems likely that most of them were Russified, just as the Finnic peoples to their north were over time. Of course specific historical events cleaned up the map a bit. The Mongol eruption likely transformed Central Asia from a predominantly Persian, minority Turkic, region to the inverse, as it is today. The exchange of Christians and Muslims during the wars between Turkey and Greece in the early 20th century also might have made things simpler, as there are suggestions of extant populations of Turkish speaking Christians (so likely Turkicized Greeks who retained their religion) being transferred to Greece, and non-Turkic speaking Muslims leaving the Balkans and settling in Istanbul and Anatolia. In the 20th century politics has had a large effect on our conceptions of the history of populations. Before World War II every twist and turn in linguistic affinity was spun into a folk migration. After World War II it was "pots not peoples" who migrated. Both of these views are basically ideological fantasy, the reality is both to differing extents by region. The reliance on theory is enabled by the fact that empirically there weren't ways to test particular hypotheses. This was clearest with the Etruscans, where the genetic data now show substantial exogenous origin, overturning a generation of archaeological theory which posits cultural continuity from the indigenous substrate to the early Iron Age Etruscan civilization. The Turks are a different case. Here "pots not peoples" is predominantly accepted. The Turkish spoken in Kashgar and Istanbul is reputedly intelligible, and the Uyghur nationalist movement to this day is based out of Turkey. But the affinity here is more of language and culture, not descent. Or it is? A conservative estimate is that 10% of modern Anatolia's population is from Central Asia. Knowing that Anatolia has traditionally been one of the more populated regions of the old world due to its ancient settlement patterns, a 10% admixture within the last 10,000 years is actually substantial. If for example the population of Anatolia was 5 million in the year 1000 (likely an underestimate, as this was the peak of the Byzantine Empire), then hundreds of thousands of Turks might have entered Anatolia in the next few hundred years. Even with considerations of skewed fitness (some men having many descendants) the Turkish migration was not trivial. But neither was it preponderant. Update: Where the samples came from in Turkey: 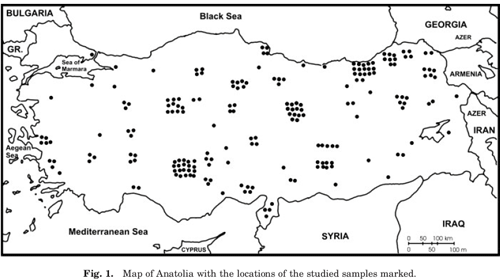