What Can We Learn From the Naked Mole Rat's Immunity to Cancer? 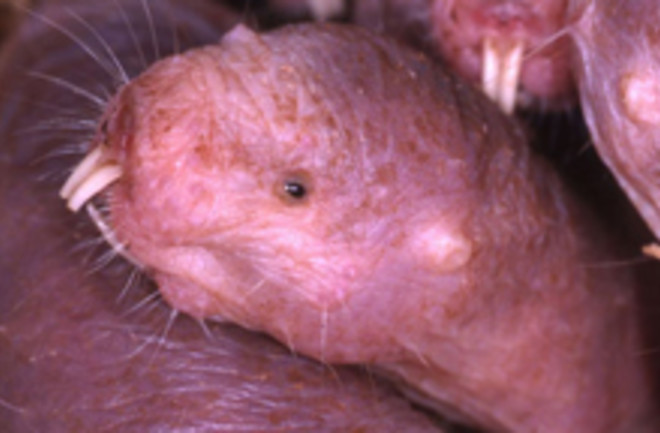 The naked mole rat is a species with a long list of peculiarities. The mole rat is about the same size as the more hirsute wild mouse, but lives seven times as long, sometimes reaching the ripe old age of 28. The creatures almost never poke their noses beyond the snug confines of their burrows and tunnels, and instead live out their lives underground in the dark. They're also the only mammals who have a social structure that resembles an ants’ nest or beehive, where only one dominant female mates and reproduces. Finally--and this is the part that most interests researchers--naked mole rats never get cancer. A new study in the Proceedings of the National Academy of Sciences probed the mole rats' robust good health, and determined how they beat cancer.

The naked mole rat's cells hate to be crowded, it turns out, so they stop growing before they can form tumors.... Normal human and mouse cells will grow and divide in a petri dish until they mash tightly against one another in a single, dense layer--a mechanism known as "contact inhibition." Naked mole rat cells are even more sensitive to their neighbors, the researchers found. The cells stop growing as soon as they touch [ScienceNOW Daily News].

has found that both mole rat and human cells have the same system of contact inhibition, mediated in both species by a gene known as p27. But mole rats, in addition, have an early acting version of the same system and presumably use the p27 system just as a backup [The New York Times].

Another gene, p16, provides the mole rats with a first line of defense, halting growth when cells first touch. This double whammy defense mechanism appears to help the mole rats stave off cancer. Humans have the p16 gene too, but it plays no known role in contact inhibition in our bodies. Since the same genes are present in both naked mole rats and humans, researchers should look for ways to duplicate the rodent's biological strategies, says cancer biologist John Sedivy, who wasn't involved in the current study.

The rat's defenses "evolved separately but use the same nuts and bolts," he says. Sedivy writes in an accompanying commentary ... that it may be possible to "tweak the entire network [of tumor-suppressing pathways] to develop new prevention strategies" [ScienceNOW Daily News].

The next step is to learn more about the naked mole rat's genetics--researchers hope that the species' genome will be sequenced soon, so they'll have more information to work with. Related Content: 80beats: In Rare Cases, Cancer Can Pass From Mother to Unborn Child 80beats: Could Prostate Cancer Be Caused by a Sexually Transmitted Virus? 80beats: A Novel Suggestion for Combating Cancer: Don’t Try to Cure It 80beats: Cancer Will Soon Become World’s No. 1 Killer, With Developing Nations Hit Hardest DISCOVER: The Big Idea That Might Beat Cancer and Cut Health Care Costs by 80 Percent Image: Kenneth Catania