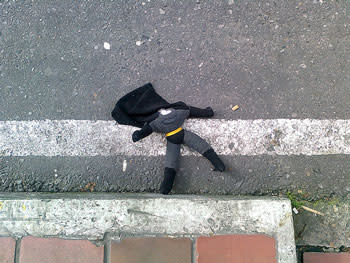 When you watch Batman plummet 20 stories and somehow drag himself upright, you know there's going to be a doozy of a doctor's visit later. And what, the curious fan might wonder, would the doctor say in the face of the massive, persistent injuries of billionaire industrialist Bruce Wayne? If some GPs want to test for weird genetic diseases just on the strength of mouth dryness and occasional fatigue, who knows what they'd say to frostbite in August or bizarre allergic reactions to plants. Or rather, now we know, thanks to a physician's case history of Patient BW

over at Ordinary Gentlemen:

By far the greatest contributor to patient’s ongoing morbidity are his multiple and seemingly ceaseless musculoskeletal injuries...Patient explained most of these (and most subsequent) injuries as being the result of membership in a private and apparently quite intense mixed martial arts club. Patient has denied being the victim of domestic abuse by Mr. Grayson following indirect and direct questioning on numerous occasions. Patient was advised to consider recreational activities that carry less risk of ongoing physical injury, or at very least allow himself to heal fully from previous trauma before returning to participation. Given the apparently quite aggressive tendencies of patient’s MMA club, advised him that almost any other activity he might choose is likely to confer less risk of ongoing morbidity (or even mortality). Patient responded to this advice with his usual polite indifference...

For much (much) more (doctors take a lot of notes, man!), head over to the League of Ordinary Gentlemen