What average genetic variation can tell us (or not) 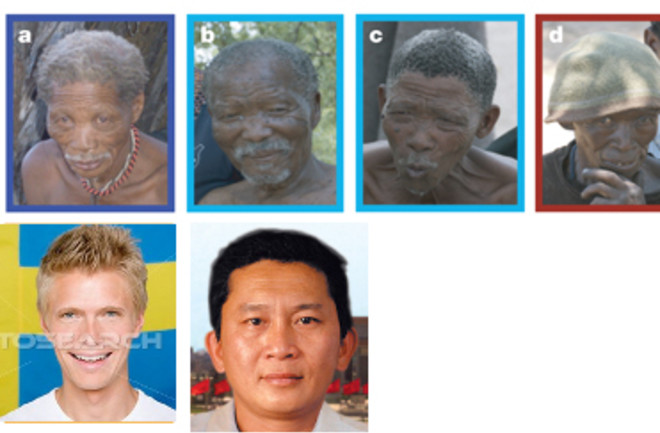 To the left I've juxtaposed the images of the four Bushmen males whose genomes were analyzed in the recent Nature paper and compared to Desmond Tutu. I've added to the montage a photo of a Swedish and Chinese man. The Nature paper looked at the HapMap data sets which had within them whites from Utah, northwest Europeans, and Chinese from Beijing, and compared these populations to the Bushmen and Desmond Tutu. One important point that this paper emphasized was that the rule-of-thumb that African populations have the most extant genetic diversity of all human groups, and that the Bushmen have the most diversity of all (perhaps with the Pygmy groups of Central Africa), seems broadly confirmed:

In the 117 megabases (Mb) of sequenced exome-containing intervals, the average rate of nucleotide differences between a pair of the Bushmen was 1.2 per kilobase, compared to an average of 1.0 per kilobase differing between a European and Asian individual.

In other words, genetic distance measured as nucleotide substitutions would show that two random Bushmen of this particular subgroup (see comment) are more disparate than two random European and Chinese individuals! But if you asked someone to cluster these individuals by phenotype I suspect they'd say that all the individuals in the first row belong together, while the two individuals in the second row are distinctive. The reason for these peculiar total genome variation patterns are probably demographic. All non-Africans likely descend from one migration Out of Africa, so they carried with them only a small proportion of the total genetic variation of the ancient Africans because of the population bottleneck to which they were subjected. Those humans who remained in Africa were not subjected to the same extreme bottleneck, and so maintained more genetic variation. This likely explains the high genetic variance of Africans vis-a-vis non-Africans. As an analogy, consider the fact there is minimal regional accent variation in Australian English in relation to the variation in Britain; local dialects take time to emerge, and Australia is a recently settled region. Another issue may be stabilizing selection for particular phenotypes, which result in the Bushmen lookingly relatively alike despite their varied genetic heritage when compared to the difference between the Swede and Han Chinese. Over the past 10-20 thousand years it seems as if there's been a lot of evolution of pigmentation in northern Eurasia. By contrast, the Bushmen have retained the ancestral genetic architecture of H. sapiens which results in a generally darker complexion. This ancestral genetic architecture is common across darker skinned populations, and is probably due to functional constraint. In other words, alleles which result in lighter skin tend to be purified from the gene pool by negative selection. The thick hair of East Asians is likely due to recent changes on the gene EDAR, while the pale hair and eyes of northern Europeans is due to a lot of evolutionary change on the pigmentation genes. For whatever reason many salient physical traits which we use to classify populations don't exhibit the pattern of the total genome, whereby all non-Africans are a branch of the tree of H. sapiens, which mostly consists of African lineages which are much more variegated. Likely new environmental selection pressures once populations left Africa play a role in this. But there may also be other factors. Biological anthropologist Henry Harpending once explained to me that even if populations exchange genes regularly so as to become indistinguishable on their total genome content, there may be social selection for particular traits correlated with group membership. Harpending explained that on many neutral markers, such as mtDNA lineages, the Bushmen and their Bantu neighbors seem to be relatively undifferentiated. But when it came to physical appearance there was a sharp distinction. Why? Harpending suggested that perhaps there is a strong fitness advantage for someone of mixed ancestry to look more like the group they're born into. For example, imagine a Bushman man takes a Bantu wife, some of his children favor the father, some the mother. In terms of total genome content all the offspring reflect the parental populations, but on the subset of genes which control traits salient in marking Bushmen-Bantu differences (e.g., epicanthic eye fold) there may be greater fitness to those who carry genotypes which reflect the group into which they're born.* Obviously genetics is fascinating to me, and probably you if you're reading this weblog. When applied to humans it has a very strong emotional impact, consider the popularity of genealogical companies which utilize genetic methods. But it is important to remember that our own intuitive model of our species is to some extent pre-scientific, and mapping colloquial concepts and preconceptions onto scientific findings can result is less than perfect clarity. In this, the 1980s hullabaloo over mitochondrial Eve served as simply a foretaste of what was to come. * As a toy example, imagine that the epicanthic eye fold is monogenic, controlled by a locus which comes in two flavors, E & e. Those with EE have the fold, those with ee do not, while those with Ee are somewhere in the middle. Imagine that the Bushmen have very high frequencies of EE, while their Bantu neighbors have lower frequencies of the E allele, but not trivial. Imagine if a Bantu woman is of the genotype Ee, while her Bushmen husband is EE. 50% of the offspring would exhibit the Bushmen epicanthic eye fold phenotype. In terms of total genome content these individuals would be no more Bushmen than their Ee siblings, but they would look more Bushmen to others of the tribe, and so might have more success finding a mate due to lower levels of social exclusion. Extrapolate this process generally and you can see how genes which control outwardly salient traits may exhibit more between group difference than the overall genome.