Weight-Loss Supplement Has Teensy Potential Side Effect: You Might *Get Mad Cow Disease*! 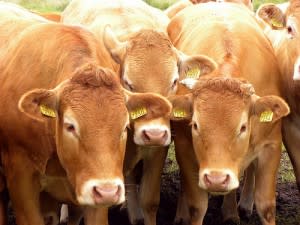 Human Chorionic Gonadotropin (hGC), a hormone produced during pregnancy, is isolated from the urine of pregnant women and used to treat infertility. Since the 1950s, however, it's also been used as a weight-loss aid---and still is, even though there's no solid evidence showing it works. But taking hCG could be worse than just ineffective: A new study shows that doses of the hormone can transmit prions, the misfolded proteins that cause mad cow disease and its human equivalent, Creutzfeldt-Jakob disease, an invariably fatal form of dementia that riddles the brain with holes (photo). That's right: There's a potential risk of contracting deadly, brain-destroying illness by injecting yourself with proteins taken from other people's urine---and you won't even lose weight. The New York Times lamely wrote earlier this month that hCG as a weight-loss regimen "has fans and skeptics"---but Travis Saunders at Obesity Panacea says that spreading mad cow is just one more reason to avoid "the most thoroughly debunked weight loss gimmick in medical history." No prion diseases have been transmitted through urine yet, the authors of the study say, but it is theoretically possible. And even the theoretical risk of a spongy brain, pitted against no weight loss benefit, is enough to say that hGC is BS.