We Don't Know Where That Sharpie's Been, But It's Good For Surgery 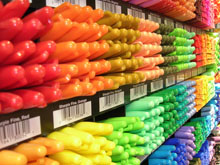 It’s been a breakthrough week for office supplies.First came X-ray shooting Scotch tape, and now surgical-grade Sharpies.It’s common practice for surgeons to outline operation sites with Sharpie markers so they won’t cut in the wrong place, but the markers are thrown out after just one use to prevent passing germs from one patient to another.

Now a study by Canadian doctors has concluded that it’s actually safe to reuse Sharpie markers, since the alcoholic base in the ink kills off any lingering bacteria.The finding is huge for hospital administrators , who are thrilled at the prospect of saving thousands of dollars by reusing the markers, which cost $2 each.

Dr. Sarah Forgie and Dr. Catherine Burton of the University of Alberta rubbed four types of nasty bacteria (two were antibiotic-resistant) on the tips of Sharpie markers.For comparison, they did the same to one-use markers designed especially for surgery, which have a non-alcoholic ink.The contaminated markers were left to sit for 24 hours.The next day, the one-use markers were still infested, but the Sharpies were sterile.The doctors say that as long as the outside of the Sharpies are cleaned the same way as other surgical equipment, the markers can be reused until the ink runs out.

Forgie and Burton have been invited to present their work at the Infectious Disease Society of America annual meeting in Washington, D.C. that begins tomorrow.The Americans seemed enthusiastic, said Forgie, noting that the U.S. health-care system is far more litigious than Canada’s.And it’s worth noting that the researchers say they have no connection whatsoever to the manufacturers of Sharpie markers (though even if they did, these findings are bad for Sharpie sales).