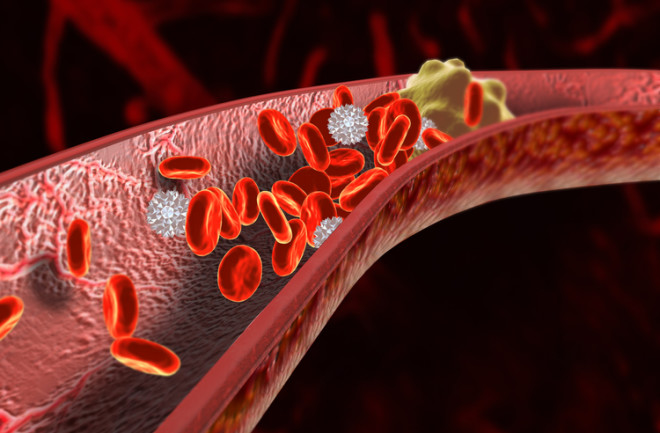 When you've got a clogged artery, your options are usually few and risky: anti-clotting drugs or surgery to unblock the clot or reroute blood flow past the blockage. But researchers in China have figured out how to use a laser to clog and then clear a blocked blood vessel in a live mouse, without surgery. This is the first time scientists have been able to externally manipulate cells inside a living animal, and it could lead to a safer way to unclog arteries in the future.

The technique relies on a tool called optical tweezers. Each pair of pincers is actually made of a single, focused laser beam. Technically the optical tweezers don't come into direct contact with the cells. Instead, they push them around using the small amount of momentum from the photons in the beam.

Researchers used the optical tweezers to manipulate red blood cells inside a mouse's capillaries. Scientists zoomed in on capillaries in the mouse's ear because these blood vessels are pretty shallow and easy to access. These blood vessels are so narrow that red blood cells have to flow through them single file. By focusing the laser on a single blood cell flowing through the capillary, the researchers could trap it and stop the flow of blood. When the researchers turned off the laser to let go of the cell, blood began flowing again.

Since the laser let the scientists work in all three dimensions, they were able to replicate this success in bigger blood vessels and with different types of cells, too. Though the procedure is called a micro-operation, researchers didn't have to cut the overlying tissue to get inside, and the heat of the laser didn't cause any visible damage to the mouse's cells.

The study, published in Nature Communications today, is the first to demonstrate such non-invasive manipulation inside a live animal. Having this kind of control from outside a living thing may one day help scientists improve targeted drug delivery and eventually lead to treatment for thrombosis, or blod clots, the researchers say.

What's more, optical tweezers can manipulate things as tiny as organelles, the smaller components that make up cells — so sub-cellular procedures could even be possible in theory.

Check out the video below to see the optical tweezers in action.