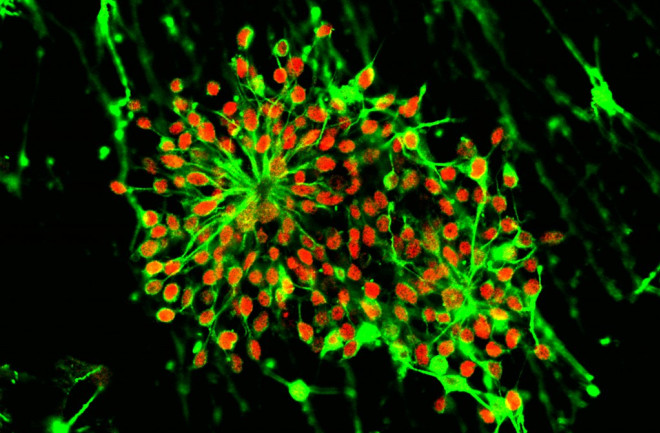 Pictured is a microscopic view of brain cells generated from induced pluripotent stem cells in the laboratory of University of Wisconsin-Madison neuroscientist Su-Chun Zhang. (Courtesy: Su-Chun Zhang/Baoyang Hu, UW-Madison) Our bodies’ cells didn’t evolve to flourish in a petri dish. Even fast-growing skin cells stop dividing and turn thin and ragged after a few weeks outside the body. This natural obstacle limited the therapeutic potential of lab-grown cells – if you can’t grow the cells, you can’t use them to heal damaged tissue. Then, a decade ago, Nobel Prize winner Shinya Yamanaka identified a cocktail of genes that, when added to mouse skin cells, transformed them into a new kind of cell that grew happily in ever expanding colonies. More importantly, these cells, dubbed “induced pluripotent stem cells” (iPSC), had their internal clocks set back to an earlier stem cell-like state, giving them the ability to grow into any other cell type found in the body.

When Yamanaka, along with other teams of scientists, repeated this feat with human cells, the press seized on the clinical implications of

Shinya Yamanaka, photographed in 2010. (Credit: Wikimedia Commons) using a person’s own cells to regenerate damaged tissues or even entire organs. But even as scientists devise new ways to grow heart muscle or neurons from iPSCs and other stem cells, financial constraints could put a personal stock of iPSCs out of reach for all but the wealthiest patients. Luckily for the rest of us, there are people whose DNA enables their cells to coexist within the immune systems of people not closely related to them, making them, if not universal donors, at least super donors. These donors’ skin cells would be used to create off-the-shelf iPSC banks for use in future clinical trials and, potentially, stem cell therapy, said Yamanaka in a presentation at a recent stem cell symposium in Berkeley, California. Yamanaka discussed the success and setbacks of the first, and to date only, iPSC clinical trial that he and a team of scientists conducted in 2014. Retinal cells were grown from patients’ own skin cells and transplanted into their eyes with the hope of restoring vision. The health and purity of the iPSCs and the final retinal cells was a primary concern for Yamanaka. During the lengthy and involved growth and selection process, the cells can acquire mutations that can turn cancerous. So before the surgery, the team sequenced the genomes of the retinal cells they grew, looking for any unexpected changes to their genes. The first patient’s cells had no serious mutations and were successfully transplanted into her eye. Because they were her cells, immune suppression drugs weren’t necessary. While there was no measurable improvement to her vision, it hasn’t deteriorated further. Genome sequencing of the second patient’s iPSCs, however, revealed mutations in two genes. They weren’t linked to cancers, in fact Yamanaka had never heard of these particular genes before. One mutation was located on the male patient’s single X chromosome, so there wasn’t a healthy backup copy. And to be safe, they decided to halt the trial in 2015. Given the eight months spent preparing the cells, and the hopes of the patient and medical team, Yamanaka said he “still wonders whether my judgment was appropriate.”

On the positive side, Yamanaka’s experiment revealed practical limitations of using a patient’s own cells for therapy. To make iPSCs suitable for lab research, explained Yamanaka, “you just need one hard-working grad student for three months.” To make a clinical-grade cell line, by contrast, it takes a team of 50 people working two years. Every step of the procedure needs to be standardized and documented. For some potential iPSC therapies, like adding neurons after spinal cord injuries, cells may be needed within a few months of the injuries. Seeing how difficult it is to make iPSCs for clinical uses, it would be ideal to have a bank of generic stem cells stocked and ready to go. Creating such a bank is one of the goals of Japan’s Center for iPS Cell Research and Application (CiRA), a joint private-public venture that aims to have such cells available when the retinal cell clinical trial resumes in late 2017.

An illustration of how one stem cell "super donor" could benefit numerous people. (Credit: CiRA)  The problem with using cells and tissues grown from generic iPSCs is the same one plaguing organ transplant medicine, namely, immune system rejection. Human cells have two sets of markers, one inherited from each parent, that tell immune cells to ignore one’s own cells. The chance of transplant rejection shrinks with a perfect or close match to these markers. Unfortunately, finding a good tissue match can take years, as witnessed by the long waiting periods on organ donation lists. As a way around this problem, Yamanaka describes an individual who inherits two identical copies of these immune system-coding markers — a super donor of sorts. Similar to the way someone with type A blood can donate to people with either A or AB blood types, a super donor’s iPSC cells could serve a greater segment of the population. Yamanaka points to a particular set of markers that would allow a super donor’s cells to match as much as 13 percent of the Japanese population. In fact, because the Japanese population contains fewer genetic variations, just 140 super donors could cover 90 percent of the population. And once an iPSC donor’s cell line is stored in the cell bank, it can serve a nearly unlimited number of people.

To find these super donors, CiRA is cooperating with the Japanese Red Cross. Not only are they looking for compatible cell markers, they also need to scrutinize the donor’s and their family’s health history. And it’s critical that the donors understand how extensively their cells might be used. CiRA has already developed their first super donor cell line, and hope to be able to cover 50 percent of Japan’s population in the next five years. A similar endeavor is underway in the United States. The wider genetic diversity of markers within the U.S. population would require a larger team of super donors; it is estimated that 200 donors could cover 95 percent of people in the U.S. A company called Cellular Dynamics International has developed 11 such lines so far, enough to cover 35 percent of the U.S. population. And best of all, once an iPSC line has been certified mutation free, it can be used to generate all sorts of cells and tissues. So in addition to the blindness trial, Japanese scientists are planning to start a spinal cord damage clinical trial in 2017. Once these stem cell tissue banks are in place, the supply will no longer be a barrier to clinical iPSC trials.