Want to predict where the flu will hit next? Check OpenTable. 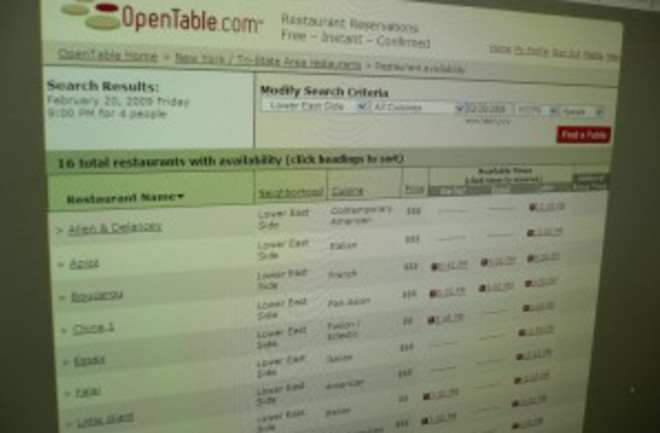 Epidemiologists are big fans of the internet - everything from Twitter to Google searches are fodder for tracking the path of disease epidemics in real time as they occur. Here, the researchers took a related approach: using OpenTable as a proxy for disease incidence. The idea is that when the flu season peaks, there will be an increase in available reservations at restaurants (people with the flu are usually too sick to go out to dinner). Indeed, they found some significant correlations between OpenTable reservations and known influenza activity. The takeaway? If you want to get that coveted reservation at the French Laundry, keep an eye on Google Flu Trends.

Guess Who's Not Coming to Dinner? Evaluating Online Restaurant Reservations for Disease Surveillance. "BACKGROUND: Alternative data sources are used increasingly to augment traditional public health surveillance systems. Examples include over-the-counter medication sales and school absenteeism. OBJECTIVE: We sought to determine if an increase in restaurant table availabilities was associated with an increase in disease incidence, specifically influenza-like illness (ILI). METHODS: Restaurant table availability was monitored using OpenTable, an online restaurant table reservation site. A daily search was performed for restaurants with available tables for 2 at the hour and at half past the hour for 22 distinct times: between 11:00 am-3:30 pm for lunch and between 6:00-11:30 PM for dinner. In the United States, we examined table availability for restaurants in Boston, Atlanta, Baltimore, and Miami. For Mexico, we studied table availabilities in Cancun, Mexico City, Puebla, Monterrey, and Guadalajara. Time series of restaurant use was compared with Google Flu Trends and ILI at the state and national levels for the United States and Mexico using the cross-correlation function. RESULTS: Differences in restaurant use were observed across sampling times and regions. We also noted similarities in time series trends between data on influenza activity and restaurant use. In some settings, significant correlations greater than 70% were noted between data on restaurant use and ILI trends. CONCLUSIONS: This study introduces and demonstrates the potential value of restaurant use data for event surveillance." Related content: NCBI ROFL: Eating behavior and obesity at Chinese buffets.NCBI ROFL: Immunizing against prejudice: effects of disease protection on attitudes toward out-groups.NCBI ROFL: OMG uv got chlamydia, srsly.