Want to be happier? Skip the small talk. 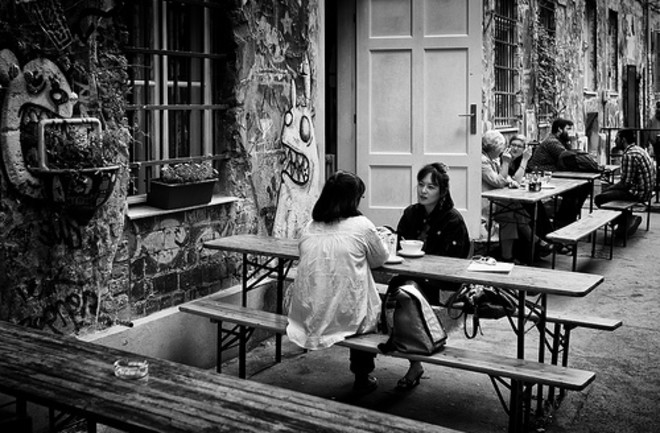 Photo: flickr/wolfB1958We all know those people. Maybe you're one of them. The person who manages, despite all the stress and work it takes to get through a normal day, to always be happy. How do they do it? What is their secret? Although it's likely that genetics play a major role in determining one's happiness, it's also thought that behavior can help (or hinder) you on your path to bliss. These scientists asked whether the content of peoples' conversation is related to their overall happiness. They recorded participants' conversations during daily life, and sure enough, they found that people who had deeper conversations tended to be happier than those who spent time on small talk.Eavesdropping on happiness: well-being is related to having less small talk and more substantive conversations. "Is the happy life full of shallow, happy-go-lucky moments and trivial small talk or full of reflection and profound social encounters? Both notions exist – the happy ignoramus and the fulfilled deep thinker – but little is known about which everyday life is actually associated with greater happiness. We report findings from a naturalistic observation study that investigated whether happy and unhappy people differ in the amount of small talk and substantive conversations they have.Although the macro-level and long-term implications of happiness have been extensively studied, little is known about the daily social behavior of happy people, primarily due to the difficulty of objectively measuring everyday behavior. Many behavioral measures (e.g., experience sampling, day reconstruction method) rely on self-reports and so cannot disentangle true associations between happiness and behavior from biases or idealized self-views. This is especially true for evaluatively-loaded behaviors such as the substance, or lack thereof, of one's conversations. To address this difficulty, we used the Electronically Activated Recorder (EAR), a digital audio recorder that unobtrusively tracks real-world behavior by periodically recording snippets of ambient sounds while participants go about their daily lives." Bonus quote from the full text: "Consistent with prior research, higher well-being was associated with spending less time alone, r = -.35, and more time talking to others, r = .31. Further, higher well-being was associated with having less small talk, r = -.33, and more substantive conversations, r = .28. To illustrate the magnitude of these effects, compared to the unhappiest participants (-2.0 SD) the happiest participants (+1.5 SD) spent 25% less time alone (58.6% vs. 76.8%) and 70% more time talking (39.7% vs. 23.2%). They also had roughly one third as much small talk (10.2% vs. 28.3%) and twice as many substantive conversations (45.9% vs. 21.8%)."