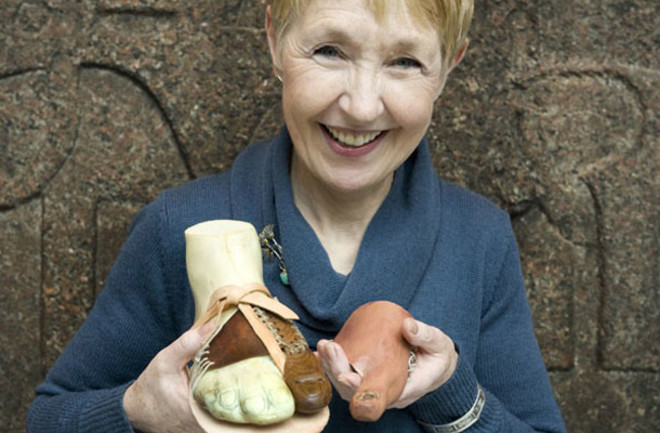 One Egyptologist isn't ready to close the book on the tale of two toes. Once thought to be mere ornamentation for the afterlife, the artificial toes found on two ancient Egyptian mummies may actually be the earliest known prosthetic limbs. The fake toes in question are the Greville Chester and Tabaketenmut toes. The Greville toe dates to before 600 BC and is made of cartonnage (similar to papier mâché); the Tabaketenmut toe could date as far back as 710 BC and is made mostly of wood, though researchers believe it also contains leather, and it even has a hinge for flexibility. Jacky Finch, an Egyptologist at the University of Manchester, UK, had a hunch that these artificial toes weren't just for looks. Not only were the toes rigorously correct in their anatomy, but they also showed signs of wear and tear--which prompted an experiment that has been over 2,000 years in the making. Finch created two false toes--one modeled on the Greville digit and one on the Tabaketenmut--and had two big-toe-deficient volunteers use the artificial toes as prosthetic limbs. She recorded the pressure made by the volunteers' feet using an electronic mat, and captured their movements on camera. As New Scientist reports:

Finch found that the volunteers could push off their false toes when taking a step, just as people with fleshy big toes do. "The results were extremely surprising in that for at least one of the volunteers, the replica worked amazingly well and produced an amazing amount of movement," she says.

But not all toes are created equal: the Greville toe allowed for better mobility, while the Tabaketenmut toe was more comfortable. If Finch is right, this finding pushes back the invention of prosthetics by several hundred years. Previously, the oldest known artificial appendage was a bronze artificial leg worn by an ancient Roman in 300 BC. While we can't ask ancient, toe-less Egyptians whether they used these man-made toes to walk, Finch is convinced they were used, as she says in a University of Manchester press release:

“My findings strongly suggest that both of these designs were capable of functioning as replacements for the lost toe and so could indeed be classed as prosthetic devices. If that is the case then it would appear that the first glimmers of this branch of medicine should be firmly laid at the feet of the ancient Egyptians.”