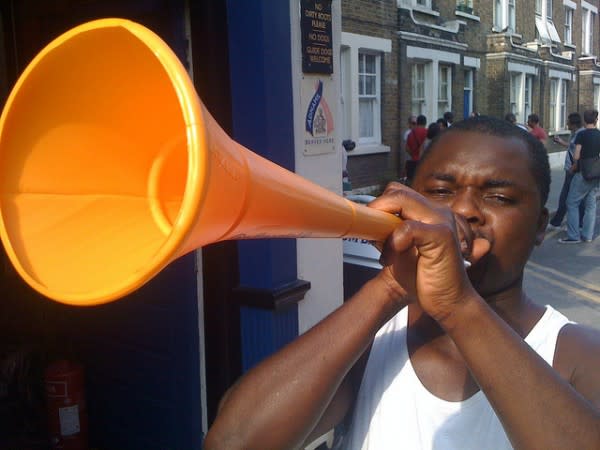 , that ear-splitting horn beloved by soccer fans and despised by everyone else, now has another count against it: it spews aerosolized spit like no other. And you know what travels in aerosolized spit? Germs. An enterprising researcher wondered

whether the technicolor trumpets had contributed to the spread of flu in South Africa during the World Cup. To see if vuvuzelas sprayed more of the tiny particles that carry germs than just plain yelling, she had some people holler into a paper megaphone and others hoot through vuvuzelas. Tracking the particles with a wind speed detector and a laser counter, she made a telling discovery: each second, yellers spewed 7,000 particles…and vuvuzelas spewed about 4 million. That’s more than four times more than a sneeze. The next step, the researcher says, is to have sick people blow into vuvuzelas and analyze the spray see whether microorganisms are actually in the particles. But we have a deeper question. Should we be avoiding kazoos? Penny whistles? Mellophones? What else is secretly coating us in a thin layer of possibly germ-bearing spit? (via Wired