A spreading rash signals something far more dangerous than a skin condition. 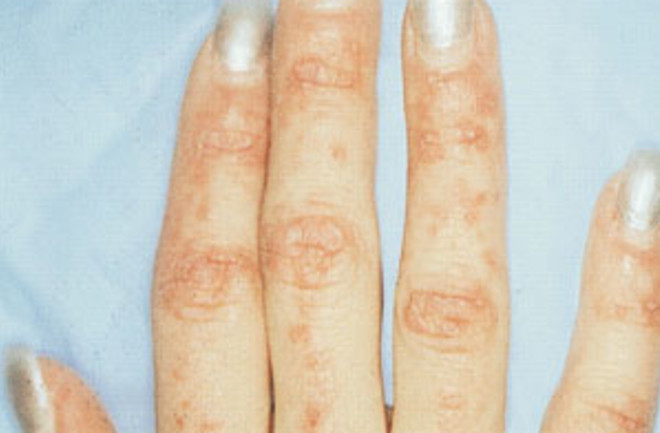 When Martha Dodd first noticed the rash on her chest, she dismissed it. She was 57, after all, and her body seemed to be growing less refined year by year. Her periods had stopped six years before, and she thought the rash might be just part of life after menopause, like drooping breasts, lines around her eyes, and most recently the swelling of her belly and the aching in her joints.

Unlike the adjacent brown age spots—which she knew were from too many summers in low-cut swimsuits—this was a blotchy red rash, a little scaly, and purplish in places. A trivial thing, Mrs. Dodd thought. Still, she tried applying a moisturizer whose manufacturer promised to make older skin youthful; that did nothing for it. A special formula with retinoids held the rash at bay for a few weeks, until she decided not to transport the big tube through airport security during a trip. When she got home, her husband noticed that the rash had spread to her back. And even though he thought she should see a doctor, Mrs. Dodd suspected it was only eczema, and a hydrocortisone ointment did seem to help for a month or so. Finally, when the rash spread to her shoulders and down onto her abdomen—and the soreness in her shoulders, hips, and thighs grew limiting—she became frightened.

Mrs. Dodd’s annual checkup came due, and she finally mentioned her symptoms to her family doctor. He suggested it was a rheumatologic syndrome, and indeed her rash stabilized soon after she was placed on steroid pills. But Mrs. Dodd lost her appetite and fatigued quickly when walking or carrying something. She became misshapen as her belly swelled: steroid side effects, her doctor thought. But he couldn’t explain why her knees hurt and her muscles felt sore, even though she was so tired that she had to give up her weekly workouts. She saw a dermatologist who examined her skin, sent her for a CT scan, and called her back urgently. A short time later she was sitting in a windowless conference room, listening incredulously while he told her that she had ovarian cancer.

By the time Mrs. Dodd came to see me, a gynecologic oncologist, she was stunned and terrified. She was no fool. She had logged a lot of time on the Internet before her appointment. She’d read that ovarian cancer is rarely cured unless caught early. She also knew that most ovarian cancers are neglected initially, because the nonspecific symptoms like bloating and pelvic pressure are typically dismissed by doctors and patients as benign bowel or bladder disorders. But she’d never heard of ovarian cancer presenting as a rash, though it can.

Ovarian cancer is one of the malignancies that can sometimes cause dermatomyositis, a disease related to such autoimmune syndromes as rheumatoid arthritis and lupus. Like these disorders, dermatomyositis results from the immune system’s attacking normal tissues. In some cases the cause is unknown, but in others it is thought that viral infections have injured muscle cells and caused them to release their contents to an immune system that has never encountered them before. These contents include enzymes that run the cell’s protein-assembly machinery and other proteins that normally reside inside the cell’s nucleus. Responding to these molecules as if they were foreign, the body mounts an immune reaction, progressively destroying the body’s own muscle fibers and inflaming the overlying skin. Steroids that suppress the immune system help by dampening the reaction and diminishing the resulting rash, muscle pain, and weakness.

Dermatomyositis is an uncommon complication of ovarian cancer, occurring in less than 1 percent of women with it. And ovarian cancer is relatively uncommon among women with dermatomyositis. But other cancers—especially those of the colon, pancreas, lung, and breast—are associated with the condition in as many as 10 to 15 percent of patients. Because the early symptoms of ovarian cancer (painless abdominal fullness, bloating, and pelvic pressure) are often insidious or absent, women may undergo unrevealing mammograms and colonoscopies in search of more common tumors before a scan identifies the underlying ovarian mass. Dermatologists and rheumatologists who diagnose dermatomyositis rarely have reason to perform pelvic examinations, so they may not discover the pelvic mass that is often the only physical indication in women with early ovarian cancer. In the majority of cases, including Mrs. Dodd’s, the ovarian cancer may not be found until the disease has been present for months. In fact, her mass was large—big enough that when I examined her belly and guided her hand to the bulge beneath her navel, we both could feel the tumor’s firmness.

The specific trigger for dermatomyositis is not known, but it is thought that several cancers can produce or incite the body to produce antibodies, proteins, and hormones. These substances can act on organs far from actual tumors, causing strange complications known as paraneoplastic syndromes. In addition to causing dermatomyositis, cancers can provoke the body to attack the brain and nervous system, impairing balance and inducing weakness, dementia, or psychosis. Other cancers produce hormones that raise blood calcium levels or lower levels of potassium. Fever, appetite loss, and weight loss from cancer all are caused by products of the tumor released into the bloodstream and acting at distant sites. Itching and flushing can result from hormones released from tumors. Substances released from cancers can prompt the body to produce clotting factors, and cancer patients may develop potentially fatal clots in multiple deep and peripheral veins.

Although high doses of steroids can improve dermatomyositis, I knew that the most effective approach to paraneoplastic syndromes is to treat the causative cancer itself. Treatment for ovarian cancer involves both surgery and chemotherapy. Mrs. Dodd’s surgery was extensive, requiring removal not only of her uterus, fallopian tubes, and ovaries but also of metastatic cancer implanted on peritoneal surfaces around the abdominal cavity—on bowel loops and on the liver and diaphragm. The surgery removed all of her visible cancer, but malignant cells remain in most women. I have seen the cancer later grow back, with lethal results.

To kill all the malignant cells and prevent later complications, Mrs. Dodd’s operation was followed by six treatments with intraperitoneal chemotherapy. In contrast to the more common intravenous chemotherapy treatments, intraperitoneal therapy involves the infusion of cisplatin, a chemotherapy drug, into a plastic and steel reservoir buried at the time of surgery under the skin of the lower rib cage. That reservoir in turn feeds a catheter tunneled into the abdominal cavity, aimed directly at the site of the tumor. Such intraperitoneal chemotherapy soaks the remaining cancer cells in high concentrations of the drug, killing them more effectively. Follow-up scans showed that the treatments resulted in complete remission of Mrs. Dodd’s cancer.

When I last saw her, Mrs. Dodd’s dermatomyositis was gone too. Her rash had begun to fade during the days spent in the hospital recovering from her surgery and had vanished entirely by her second round of treatment, although the chemotherapy caused her muscles to ache as much as her dermatomyositis had. With the six intensive treatments behind her, she came back to me for consolidation chemotherapy once a month for a year, receiving a lower dose of intravenous therapy designed to hold any residual undetectable cancer at bay, since recurrence rates after initial surgery and chemotherapy for advanced ovarian cancer are still disturbingly high.

Mrs. Dodd went back to living her old life, although with a newfound sensitivity to the sneaky symptoms of ovarian cancer. Before every office visit, she told me, she would stand in front of her bathroom mirror and search for signs of the rash that might herald a recurrence. So far, her skin is still clear.

Stewart Massad is a professor of gynecologic medicine at Washington University in St. Louis. The cases described in Vital Signs are real, but names and other details have been changed.