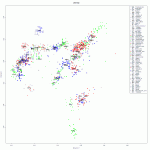 Over at his blog Dienekes Pontikos has taken some public data sets and his own Dodecad samples and generated a massive MDS plot of West Eurasian populations. The MDS is fine as it goes. It illustrates clearly that when you visualize an individual on a plot defined by the two largest dimensions of variation in the total data set clusters naturally emerge. Some of of them are totally expected. For example, the cluster of Ashkenazi Jews. But, some of the relationships need to be interpreted with care. The similar position of Sicilians with Ashkenazi Jews does not mean that these two populations are identical. Rather, their ancestral components exhibit similarities in such a manner that in a representation constrained to a few dimensions they shake out similarly. You can view the full thumbnail by clicking it, but I thought that for purposes of intuitive comprehension it would be useful to "cut out" the outlines of the distributions, and label them by geography. I added Ashkenazi Jews because I thought readers would be interested, but omitted the other Jewish groups. 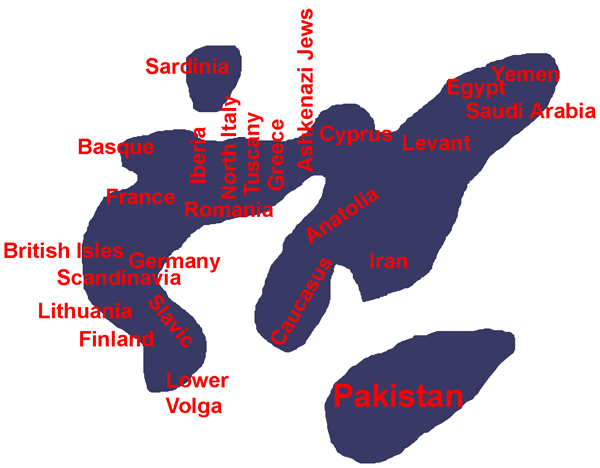