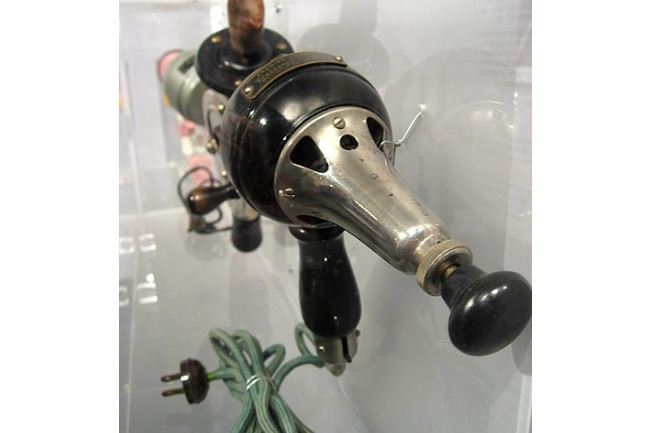 In my research on the medical history of electricity, vibrators appear alongside galvanic battery belts and quack electrotherapies as one of many quirky home cures of the early 20th century.

By the early 20th century, manufacturers were selling vibrators as ordinary electric household appliances. The merits of electricity in the home were not as obvious then as they are today: Electricity was dangerous and expensive, but it promised excitement and modernity. Electric commodities, like sewing and washing machines, became the hallmarks of the rising middle class.

Vibrators were another shiny new technology, used to sell consumers on the prospect of modern electric living. Just as banks handed out free toasters for opening checking accounts in the 1960s, in the 1940s the Rural Electrification Administration distributed free vibrators to encourage farmers to electrify their homes. These modern electric devices were not thought of as sex toys.

In what may sound surprising to 21st-century readers, these appliances promised relief of a nonsexual variety. Users of all ages vibrated just about every body part, without sexual intent.

Vibrators made housework easier by soothing the pains of tired housewives, calming the cries of sick children and invigorating the bodies of modern working men. They were applied to tired backs and sore feet, but also the throat, to cure laryngitis; the nose, to relieve sinus pressure; and everything in between. Vibration promised to calm the stomachs of colicky babies, and to stimulate hair growth in balding men. It was even thought to help heal broken bones. As such advertisements suggest, vibrators were not standard medical treatments, but medical quackery, alternative medicine that didn’t deliver on their promises. Yet the electrical cure-alls sold by the millions.

The classic form of medical quackery in the U.S. market was patent medicine — basically useless concoctions made mainly of alcohol and morphine, sometimes containing downright damaging ingredients like lead and arsenic. After the passage of the Pure Food and Drug Act in 1906, the federal government began regulating the sale of patent medicines.

A Cure for Masturbatory Illness

For most of the 20th century, vibrators remained innocuous quackery. Good Housekeeping even bestowed its seal of approval on some models in the 1950s. When the sexual revolution hit America in the 1960s, vibrators were largely forgotten, outdated appliances.

Kim Adams is a postdoctoral lecturer in English at New York University. This story was originally published on The Conversation. Read the original article.