In reviewing a paper which sketches out the boundary conditions under which group-level natural selection would result in the emergence of altruism as a genetically encoded trait, I stated:

... I would look to cultural group selection, because there are many cases of women being assimilated into a dominant culture, and their offspring speaking the language, and expressing the values, in totality of their fathers. One inherits 50% of one's genes from one's mother and one's father, but inheritance of cultural traits which are distinctive between parents may show very strong biases. Partitioning variance between and within groups on cultural traits often shows far greater between group differences; consider variance in speech, within a tribe there are slight variations, but between tribes the accent variation may be strong enough to accurately assign any individual to the correct tribe by speech alone.

Altruistic people are cooperative, and being cooperative can lead to more children in a social species for a variety of reasons (e.g., religious people have more children and donate more to charity in the modern US). Altruism is best understood in terms of individual differences within a population and evolutionary stable strategies. Clearly individuals differ in their pro-social tendencies, and the relative frequency of pro-social people within a population can shift given different conditions. I'm sure there are some environments where it's reproductively advantageous for 90% of people to be sociopaths.

As I noted the biggest problem for biological group selection is that groups are clumsy & lumbering organisms in an evolutionary sense. They don't reproduce fast, and may not exhibit enough distinctiveness to become a coherent unit of selection. Multicellular organisms face the problem of being slow to respond to evolutionary pressures in relation to their pathogens, ergo, sex. The nature of sexual process is also essential in mediating intragenomic competition and conflicts, the details of which serve as the core of Mark Ridley's book The Cooperative Gene. Shifting the focus to human social entities, anyone who has worked in a large corporation can tell plenty of stories of how organizations fragment in interests on the level of subsidiaries, working groups and individuals. Nevertheless, corporations have become very common, and firms are able to coordinate collective action so as to flourish and succeed, at least for a time (like organisms, it does seem to me that firms grow, mature and eventually decline due to institutional sclerosis). A recent paper in PNAS outlines the formal and empirical case for why group-level selection as a biological phenomenon for humans is likely far rarer than as a cultural dynamic. Culture rather than genes provides greater scope for the evolution of large-scale human prosociality:

Whether competition among large groups played an important role in human social evolution is dependent on how variation, whether cultural or genetic, is maintained between groups. Comparisons between genetic and cultural differentiation between neighboring groups show how natural selection on large groups is more plausible on cultural rather than genetic variation.

The paper is framed in many ways as a counterpoint to Samuel Bowles' work which emphasizes biological group selection (that is, operating through genetic rather than cultural variation). So the core formalism is familar: β(wg,ps)/β(wig,pig) > (1 - FST)/FST β(wg,ps) = is the increase in the mean fitness of the group with an increase in the frequency of altruists β(wig,pig) = is the fitness decrease of the individual acquiring the altruistic allele FST is as you will recall the proportion of variance within a population which can be attributed to the variance between two groups within the population. For example, if you had two populations, and the FST ~ 0.20, then 80% of the total variance across the two groups could be accounted for by variance with the groups themselves (that is, 1 - FST). But, 20% of the variance results in distinctiveness between the two groups. If FST ~ 0, then substantively there really aren't two groups, but two sets of individuals who simply have different labels. There's no added information from population substructure. If FST is very small, then the ratio on the left-side has to be very large. In other words, the group gains to altruism have be great, or the individual cost of altruism has to be trivial. In a genetic sense we do know that FST across neighboring groups is often a very small value, which is why there has long been skepticism of the power of biological group-level selection. The gains to altruism for groups seem unrealistically large, or the penalty for altruism to individuals seem unrealistically small. But what about culture? This is a different case altogether. As I have stated before, between group variance in culture can be very large. Consider language. In many cases you can perfectly differentiate between two groups based on language alone even if they are neighbors who resemble each other physically. In the above paper they looked at The World Values Survey to construct cultural FST between neighboring groups (nations). They then compared cultural to genetic FST. Figure 1 shows the results: 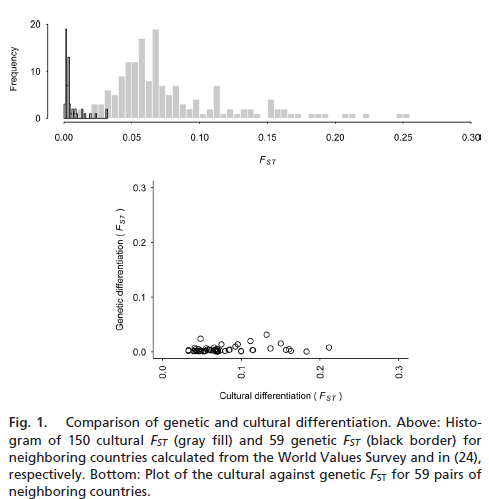 Just by inspection it is clear that

. For natural selection to operate with any power you need variance of heritable traits. In in regards to variance among human groups culture has a lot more of that than genes. How much more? The authors of the paper calculate that median cultural FST is an order of magnitude greater than median genetic FST. Using the median FST for each class of traits in the paper, here is the values for the right-side of the equation above: Cultural = 14.15 Genetic = 311.5 Remember that the left-side has to be greater than the right-side for selection to drive the emergence of altruism/prosociality. 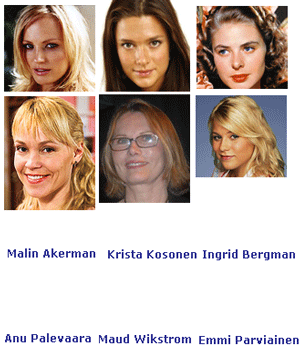 To illustrate the relative salience of cultural vs. genetic variance between neighbors, to the left I've placed 6 photos, and 6 names, with the photos and names mapping across to each other positionally. So the name for the first photo is in the same position in the set of names. The images are of actresses from two European nations who are neighbors and have a long historical association. Of course genes aren't perfectly reflected in appearance, but I suspect it might be difficult for you to discern two collections of 3 images. The sample size is small, but imagine if you had 6 images, 3 of Nigerians and 3 of Swedes (or 3 of Chinese and 3 of Pakistanis). If you have enough genetic distance the task is trivial. On the other hand, look at the names. If you are an English speaker I think you'd immediately recognize that 3 of the names, the Finnish ones, are a bit "strange." The Swedish ones might not be totally familiar, but a name like "Akerman" is going to strike you as less exotic than a name like "Palevaara." I picked Swedes and Finns because these two groups have a long historical and cultural association, but the linguistic difference is very large. Large enough that outsiders can immediately discern the difference in language from a list of names. For those who speak Germanic languages Swedish names will immediately seem far less exotic than Finnish ones, but even if one is a Turkish speaker I believe that one can see similarities in the sequence of letters which characterize Finnish names (double vowels and such) as opposed to Swedish ones (I know that Turkish is closer to Finnish than it is to Swedish, but the distance between Turkic and Finno-Ugric languages is so great as to make this relationship irrelevant). Of course emphasizing the possibility for selection of groups through culture as opposed to genes does not negate the possibility of selection for traits which are genetic on the individual scale. To operate successfully within cultures, one needs to have a "prosocial" suite of skills. As cultures became powerful forces which pervaded human action behavioral traits which allowed individuals to operate with ease within cultures and collectives were no doubt beneficial and favored by natural selection. Within the paper they even note very specific biological adaptations, such as that for the persistence of latcase in adults due to the spread of cattle-culture, driven by cultural conditions. Let me allow the authors to bring up the major point of contention between themselves and Samuel Bowles:

Our calculations show much greater scope for cultural rather than genetic group-level selection, although we should acknowledge how this inference may be limited. The low and very low genetic FST values that characterize modern national neighbors might not be typical of ancestral Pleistocene populations. Certainly, much smaller population sizes would have generated more drift. On the other hand, we do not think that the available data from living populations is consistent with neighbors having FST values as high as 0.076, the baseline figure used in...It is difficult to know how last Glacial population structures might have been like compared to Holocene hunter-gatherers.

The genetic FST which some researchers suggest was the Paleolithic norm, derived from spotty data from contemporary hunter-gatherers, frame the plausibility of whether genetic group selection occurred or not. Additionally, to a great extent the scale of cultural FST in the Paleolithic is also a matter of speculation, though at least material culture (e.g., pottery, tool style, etc.) can be ascertained with some level of confidence. But, even if Samuel Bowles' and colleagues are correct in assuming higher pre-modern population genetic FST due to population fragmentation and such, it seems likely that cultural FST was much greater. If we are to look at group-level selection effects it seems to me that investigation in the domain of the latter would be more fruitful than in the former, though the two are not exclusive alternatives. Citation: Adrian V. Bell, Peter J. Richerson, and Richard McElreath, Culture rather than genes provides greater scope for the evolution of large-scale human prosociality, PNAS 2009 106:17671-17674; published online before print October 12, 2009, doi:10.1073/pnas.0903232106