In the early 1900s, Mary Mallon worked as a cook — and spread typhoid fever to the families she worked for. 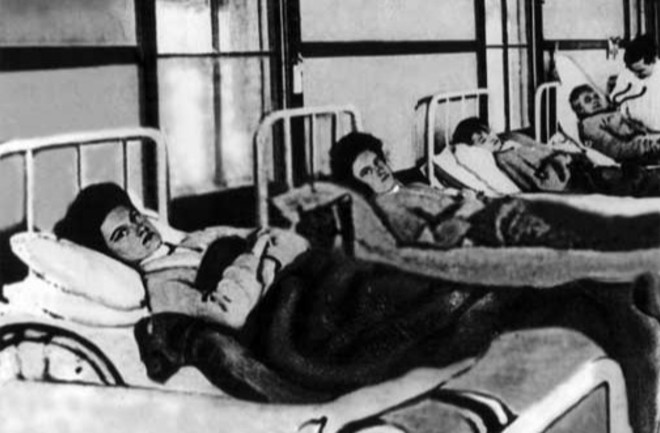 Even though the press coined the nickname “Typhoid Mary” over a century ago, the sad story of Mary Mallon has become acutely relevant again over the past few months. As an asymptomatic typhoid carrier, Mallon became infamous for infecting at least 51 people — though some estimates put the tally at more than 122 — while working as a cook. In 2020, the coronavirus pandemic has led the world to examine how this kind of carrier affects infection rates.

One recent study in the Italian town of Vò estimated that over 40 percent of cases may be asymptomatic, stoking fears that COVID-19 will continue to be unknowingly spread by seemingly healthy individuals. The life of “Typhoid Mary,” the first recorded case of this kind, is a reminder of the importance of raising public awareness — and of how far our understanding of germ theory has come.

When the wealthy Warren family was hit by typhoid fever at a summer countryside retreat in 1906, there was no obvious explanation. The infection was usually spread through food or water contaminated by salmonella, so it was largely associated with poor, inner-city areas, where sanitation was overlooked. One paper at the time called it the disease of “dirt, poverty and national carelessness.”

The family hired an investigator named George Soper. The drinking water in Oyster Bay was fine, so Soper turned his attention toward the 37-year-old Irish cook, Mary Mallon, who had since left the household. He found that of the last eight families that had hired Mallon as a cook — and consumed her most popular and salmonella-friendly dish, peaches with ice cream — seven had contracted typhoid fever. That was sufficient evidence for authorities to track her down in person.

In 2020, some Americans have resisted recommendations to wear masks and socially distance. Mallon was also reluctant to accept medical advice, and initially chased Soper out of her Park Avenue workplace with a carving fork when he asked for blood, urine and feces samples. When Soper notified the New York Public Health Department, Mallon evaded arrest for five hours until she was caught, and physician Sara Josephine Baker eventually had to sit on her in the ambulance to prevent her escape.

After testing positive for typhoid bacteria in 1907, she was forcibly moved to a quarantine facility on North Brother Island. A new city health commissioner helped to release her in 1910 on the condition that she never work as a cook again, but Mallon didn’t keep her promise. Baker tracked her down five years later, working under an alias in the kitchen of Sloane Maternity Hospital, which was in the midst of a typhoid outbreak.

Why did she keep cooking? It’s likely that for a female Irish immigrant, it was the best-paying job available. And besides, she felt fine: Mallon showed absolutely no symptoms herself, and there was no precedent for a healthy person carrying typhoid fever. Germ theory was in its infancy, and it wasn’t even common practice for cooks to wash their hands yet. Mallon also didn’t trust the suggestion from medical professionals that her gallbladder was the infection center and should be removed — it was a life-endangering surgery at the time. Her refusal ensured she would spend the next 23 years on the island.

After a second arrest, the image of “Typhoid Mary” was solidified in the media. The New York Tribune referred to her as an “agent of death” in 1918, and ghoulish cartoons showed her cracking skulls instead of eggs into a bowl. The name still conjures a degree of menace: Marvel even used it for a female comic book villain in 1988.

This illustration of Typhoid Mary appeared in 1909 in The New York American. (Credit: Wikimedia Commons)

Mallon’s case has often prompted debate about what matters more: personal liberty or public safety. By the time of her death in 1938, more than 400 other healthy people infected with Salmonella typhi had been identified in New York, but none was quarantined against their will. Mallon’s unique treatment may be the result of her being the first asymptomatic carrier on record. Or maybe she was just easily scapegoated as an unmarried, working-class immigrant with no family. In the 1900s, as now, it was easier to blame the less fortunate in society than to actually focus on educating the public.

Mallon became the face of reckless contamination in the early 20th century, a role occupied today by crowds determined to enjoy their beach holidays without a mask. Unlike these modern rule-breakers, however, Mallon could not Google how to prevent spreading disease. She didn’t understand what she’d been blamed for, as the public at large had no understanding of asymptomatic carriers.

“I never had typhoid in my life, and have always been healthy,” Mallon told one reporter. “Why should I be banished like a leper and compelled to live in solitary confinement with only a dog for a companion?” Even at the end, Typhoid Mary had no context for her own place in medical history.