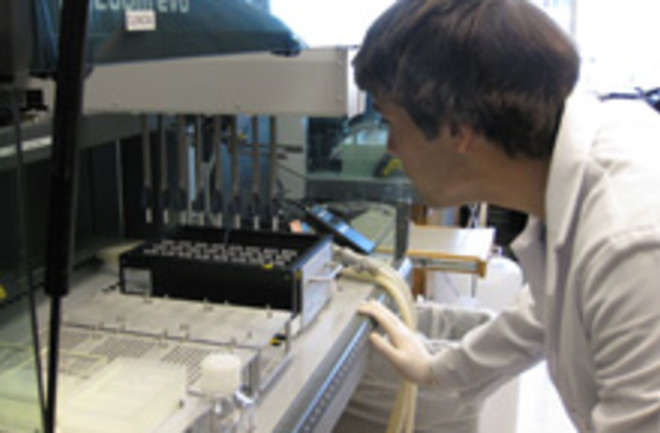 Researchers have taken significant steps towards determining the mysterious causes of autism, with the discovery that two-thirds of autistic people have a genetic variant that influences how neurons connect with each other. An additional study found

a link between autism and small "mistakes" in another DNA segment involved with cell communication. Both reports add weight to the idea that autism is related to problems with the way brain cells connect [Los Angeles Times].

The two studies were made possible by improved technology that allowed researchers to compare the genomes of thousands of autistic people to those of thousands of people without the disorder, looking for genetic differences between the two groups.

Previous studies that have identified several genes that are implicated in autism, but ... they are extremely rare and account for a very small proportion of autism [New Scientist]

. The twostudies, both published online by Nature, won't lead immediately to new treatments, but they open up important new avenues of research. The first study identified genetic variants on a region of chromosome 5 that is

squarely between two genes that produce cell-adhesion molecules, which govern how neurons connect to each other. The variants don't raise risk all that much--about 20% for the strongest. But, [lead researcher Hakon] Hakonarson says, the work is exciting for two reasons: 65% of [autistic] kids in the study had that variant, compared with just under 60% in the control group--a difference that, across a population, is significant, he says. And even more important, the link with cell-adhesion molecules firms up suspicions that in autism, "nerves don't connect normally or break down" [ScienceNOW Daily News].

The second study scanned the genomes of people with autism for copy-number variants (CNVs), in which segments of DNA are either replicated or deleted. The researchers

turned up nine repeated or deleted regions, some of which had been pinpointed previously. Four of the CNVs were in genes that belong to the ubiquitin gene family, which helps control nerve connections [ScienceNOW Daily News].

Researchers and families of autistic children are applauding the findings as a real step forward, but autism expert Simon Baron-Cohen notes that genetic variants tell part of the story, but not all.

"The challenge for future research will be to establish which aspects of autism they can explain, how many of these genes are necessary and sufficient to cause autism, and how they may interact with environmental factors," he says [New Scientist].

Related Content: 80beats: Autism Linked to Genes That Govern Learning DISCOVER: Mom and Dad Are Fighting in Your Genes--and in Your Brain DISCOVER: Autism: It's Not Just in the Head discusses new treatments DISCOVER: An Autism Gene Located Image: Children's Hospital of Philadelphia