Two for One: How Our Brains Reward Us Twice for Every Meal 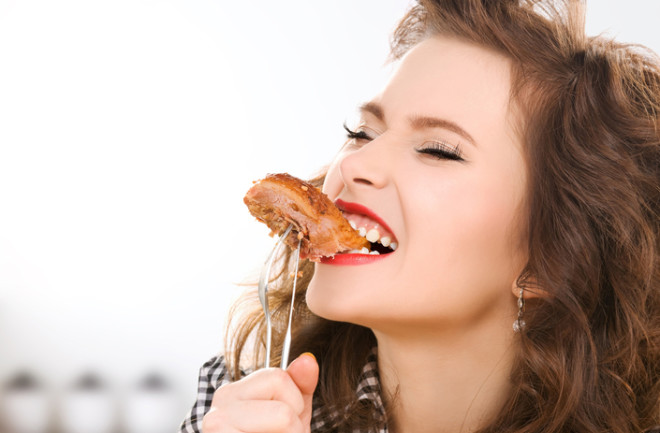 Food. It’s probably on your mind quite a bit this holiday season, whether you’re anticipating festive meals or dreading the pounds you might pack on during a bout of epicurean overindulgence.

Though tips on managing our cravings for all things sweet and fatty abound, it’s also worth remembering that the odds are stacked against us when it comes to resisting the call of another slice of pie.

Our brains respond to food, and even the sight or thought of it, with a heady rush of chemicals aimed at convincing us to eat. It’s a relict of bygone days when a steady food supply was no guarantee and the best strategy was to stuff ourselves every chance we got. Our brains evolved to deliver a rush of neurotransmitters to both motivate us to and reward us for eating. Is it any wonder we still enjoy it so much?

And it turns out that we actually get not one but two chemical rewards for satiating ourselves. Using a new imaging technique, a team of researchers led by scientists at the Max Planck Institute for Metabolism Research in Germany have discovered that our brains release the neurotransmitter dopamine in response to a tasty snack both when the food hits our mouths and after it’s entered our stomachs — a real twofer.

With a modified version of a Positron Emission Tomography (PET) scan, the researchers were able to track the movement of dopamine through the brains of 12 participants who had just been given something to eat. Dopamine is part of the brain’s reward system, and it’s released both when we see or think about food and when we actually eat it. The researchers gave the participants either something tasty to eat (a milkshake, of course) or a bland control food (a “tasteless solution”) and watched to see when and where the neurotransmitter appeared.

Dopamine blossomed in the participant’s brains as soon as the milkshake hit their tastebuds, as expected. It was concentrated in areas involving reward-value signaling, memory and inhibitory control, among others — again, no surprise. But, 15 to 20 minutes after the milkshake had gone down the hatch, the researchers found another wave of dopamine in people’s brains. Even more odd, it was in totally different regions than the first rush. This time around, the dopamine appeared in regions related to higher cognitive functions, compared with the more primal areas stimulated in the initial release of the neurotransmitter.

Further analysis picked out another trend: If people had been craving the milkshake, the first rush of dopamine was quite strong, but the second was much smaller. If they hadn’t been craving the milkshake as much, the first release was small, but the second was larger. In short, the people who really wanted a milkshake got a bigger reward when it first hit their tongues. The less milkshake-happy saw a smaller reward at first, but they got a more substantial dopamine hit later on.

The work was published Thursday in Cell Metabolism.

From Tongue to Stomach

It’s a bit of an oversimplification, but the double whammy reflects the fact that our mouths and our stomachs like food for two different reasons. Our mouths like food because it tastes good, and our stomachs like it because it’s full of nutrients. So when we taste something good, our brains reward us with dopamine. And, when our stomachs get the stuff they need to fuel our bodies, they also send signals to the brain telling it to release a chemical “thank you.”

The researchers think that the people who craved milkshakes got more dopamine upfront because their payoff was bigger, and then less later on in an attempt to curb overeating. Those who got a bigger hit later on were seeing their bodies respond to the nutritional value of the food: Their stomachs were simply telling their brains “This is good! Let’s get more!” by rewarding the behavior. It’s proof that our bodies do reward us for eating food that’s good for us, not just stuff that tastes good.

Though the response has been observed in mice, this is the first time it’s even been found in humans. The discovery has implications for how we treat obesity, the researchers say, as it seems that the more we crave food, the less we get rewarded for it later on when our stomachs are counting nutrients. By choosing meals that favor in-the-moment gratification — things with high sugar and fat content — over long-term satisfaction, we’re also forgoing that second dopamine hit, the one actually related to nutritional content. The result could be choices that are less healthy.

If anything, it’s also a reminder that less immediately-satisfying foods do have their own reward. We just have to wait a little to get it.