The pesky insects that transmit the disease could also deliver a vaccine. 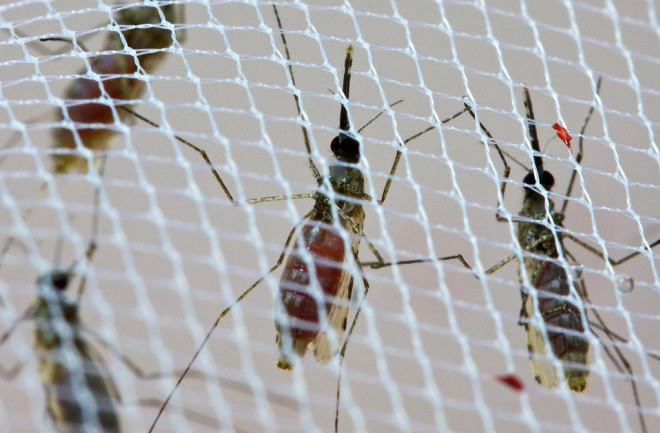 Adult mosquitoes feed on human blood through the mesh of membrane feeders. (Credit: Will Betz/Seattle Biomed)

Stefan Kappe sticks his left hand into a mosquito-filled Plexiglas box and watches the bugs feed furiously on his blood. Fortunately, they aren’t injecting Kappe with the human malaria parasite, which infected roughly 207 million people worldwide in 2012 and killed some 627,000. Instead, the insects are part of an unconventional project to develop a malaria vaccine via lab-grown mosquitoes.

In humid, dorm-size “swamp rooms” at the Seattle Biomedical Research Institute, shallow plastic tubs of wriggling mosquito larvae feast on bits of tropical fish food delivered by spice grinder. As they grow, the insects graduate into Chinese takeout containers; some of them eventually make it into breeding cages.

A technician serves dinner to mosquito larvae in their trays. (Credit: Seattle Biomed)

Mosquitoes “are bloodsucking machines, and the malaria parasite has very effectively hijacked that mechanism,” says Kappe, who heads the laboratory for the institute’s malaria program. With more than 5,000 genes and a maddeningly complicated life cycle, the malaria parasite (Plasmodium falciparum) has routinely outmaneuvered the human immune system and long frustrated vaccine development efforts.

More than two-dozen vaccines are in the works, and most of them rely on partial parasites. One of the vaccines furthest along in development fuses a surface protein from the parasite with another from the hepatitis B virus to trigger an immune response. Preliminary results showed protection rates up to 56 percent. “It’s a great success, but it’s not enough,” Kappe says.

So Kappe and colleagues are genetically engineering a vaccine made from a whole but weakened malaria parasite in hopes of providing more targets for the immune system’s antibodies and killer T cells to attack. This increases the potential effectiveness, as well as the risk.

A constant flow of water around the blood keeps it at 98.6 degrees Fahrenheit to attract the mosquitoes. (Credit: Will Betz/Seattle Biomed)

The researchers grow the altered parasites in dishes of human blood, which they feed to bloodthirsty female mosquitoes. Each mosquito can harbor 30,000 to 40,000 developing parasites that, when mature, migrate to the insect’s salivary glands. Then the mosquito injects what is now a potential anti-malaria vaccine like a fusillade of tiny torpedoes into a lab mouse or a human volunteer.

“The problem with whole-organism vaccines is how to make them safe,” Kappe says. An earlier version of his vaccine only partially weakened the parasite, meaning it could still cause malaria in rare cases, but Kappe believes his lab has since fully disabled the parasite by deleting three genes crucial for its development. Similar versions of the new vaccine protected 100 percent of lab mice in early tests.

This summer, Kappe and colleagues will expose a dozen human volunteers to vaccine-harboring mosquitoes, followed eventually by a batch of bugs with the full-strength malaria parasite. If the vaccine proves itself in this and subsequent clinical trials, the next challenge will be scaling up production of the crippled parasites and injecting them via needles instead of mosquitoes.

[This article originally appeared in print as "Anti-Malarial Drugs, Injected by Mosquito."]