Does looking at the image to the left make you uncomfortable? If so, you might be suffering from trypophobia, or fear of clusters of holes. Although this phobia appears to be relatively common -- it even has its own website and Facebook group -- it has not been scientifically studied ... until now! Here, the researchers explored the features of images that trypophobia sufferers fear most (obtained from the aforementioned website). They found that many of these images have "spectral characteristics" (features of luminosity and contrast) that resemble those of extremely poisonous animals. Based on these analyses, they conclude that trypophobia could be related to an evolutionarily ancient instinct to avoid dangerous animals.

Fear of Holes. "Phobias are usually described as irrational and persistent fears of certain objects or situations, and causes of such fears are difficult to identify. We describe an unusual but common phobia (trypophobia), hitherto unreported in the scientific literature, in which sufferers are averse to images of holes. We performed a spectral analysis on a variety of images that induce trypophobia and found that the stimuli had a spectral composition typically associated with uncomfortable visual images, namely, high-contrast energy at midrange spatial frequencies. Critically, we found that a range of potentially dangerous animals also possess this spectral characteristic. We argue that although sufferers are not conscious of the association, the phobia arises in part because the inducing stimuli share basic visual characteristics with dangerous organisms, characteristics that are low level and easily computed, and therefore facilitate a rapid nonconscious response." 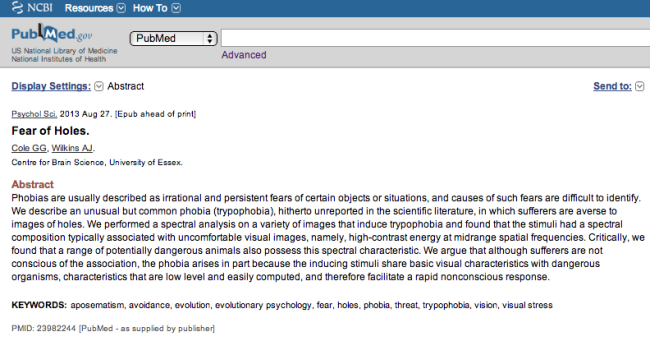 NCBI ROFL: Gelotophobia: more common than you might think.

NCBI ROFL: It was as big as my head, I swear! Biased spider size estimation in spider phobia.