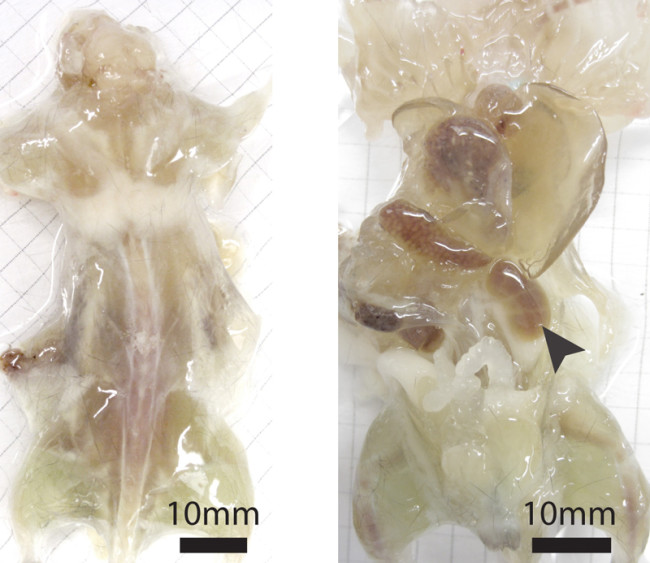 Researchers have found a way to make organs, and even bodies, transparent. (Credit: Yang et. al, Cell) Biologists have long wished for superhero-like X-ray vision to see right into organs or even the whole the body. Imagine the possibilities: watching where cancer cells go when they metastasize, tracking an asthma drug’s effect on the lung’s airways, or zeroing in on neurons in the brain. A team of researchers at the California Institute of Technology have realized that dream of peering deep into the body. In a study published yesterday in the journal Cell, they demonstrate how to turn organs, and even bodies, into see-through “windows to the body” while keeping cellular structures and connections intact.See-Through Organs What makes tissues opaque are lipids, so the first step is to remove them. But how do you expunge the lipids without damaging the basic structure of the tissue or its nerves and other vital properties? Viviana Gradinaru and her collaborators had already developed a “brain-clearing” technique called CLARITY, which involves embedding tissue into hydrogels to preserve its outer shape and then using detergents to scour out the lipids, leaving behind a clear shell. In the study, performed on euthanized mice and rats, researchers upped the ante considerably by showing how CLARITY can be used to lay bare not just bits of tissue, but entire organs and even bodies. First, they figured out which kind of hydrogel allows detergents to do their lipid-clearing job the fastest. Then they discovered that by delivering the hydrogel and clearing detergents into the bloodstream of the rodents, they could speed up the clearing process without causing tissue damage. The detergents swept through the tissues and completely “clarified” organs such as the kidney, heart, lung, and intestine within 2 to 3 days. Within two weeks, the whole brain and entire body also cleared. Encouraged, Gradinaru and her team decided to test the new method on human tissue. “We actually made a biopsy sample for a skin cancer patient, and we were able to detect two more cells throughout the tissue,” Gradinaru told Discover. Purging the lipids provides researchers with a clear view of what’s going on deep within the organ or body. Think of watching a concert from the front row instead of the nose-bleed section. Mapping Cell Connections The new transparency method, combined with techniques that allow for the “staining” of cells, will allow researchers to make three-dimensional maps of the connections between the cells within organs, such as the lining of the airways in the lungs or neurons connecting different parts of the brain. That’s crucial for understanding the complex, long-distance cellular interactions that play an important role in a range of biological processes, from cancer to nerve degeneration. And since the method uses readily available, inexpensive equipment and clearing agents, researchers across the globe will be able to use the protocol to make “subcellular interrogations,” as the paper puts it. "I hope it will be used," Gradinaru says. "We are very happy to help labs get this up and running."