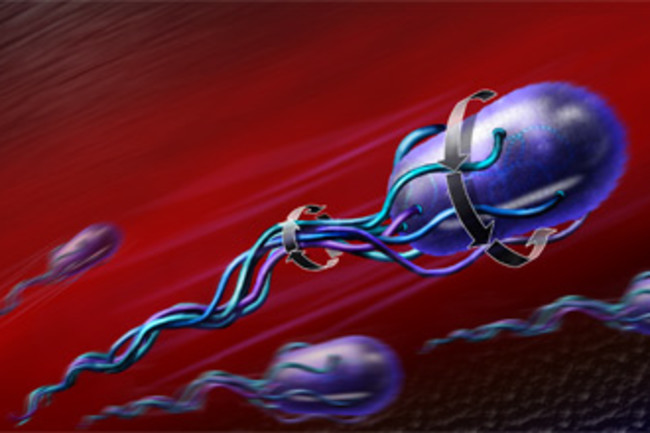 Wild bacteria may scoff at our attempts at domination—but in the lab, we're still in charge. Researchers at Emory University, led by Justin Gallivan, are creating bacteria that will hunt down Atrazine—one of the most widely-used herbicides in the U.S. The chemical has been banned in the E.U., shown to cause birth defects (including hermaphrotization) in frogs and made its way into our groundwater. E. Coli naturally swim around using their flagella—whip-like tails that spin around to either propel the bacteria forward or send them tumbling, which allows them to reorient and explore their environment. But Gallivan tweaked the bacterium's DNA, cutting out a gene that was essential for forward motion. He then designed a fancy piece of RNA, called a riboswitch, that contained the missing gene, but would only be switched on in the presence of Atrazine. In this way, the bacteria would amble around haphazardly until they stumbled upon some Atrazine, at which point they would begin swimming toward the source. Gallivan hopes to combine his specialized bug with genes from bacteria that naturally eat Atrazine, creating E. Coli that can both hunt for and destroy the herbicide. The potential applications of specifically-activated riboswitches go beyond just navigating toward a contaminant. Gallivan hopes to soon "use multiple riboswitches to trigger genes in a specific order. This would enable E. coli to follow a sequence of complex tasks—such as sticking to or 'picking up' a small sphere in one area and releasing it elsewhere." Yes, bacteria are being trained to carry miniature briefcase bombs.