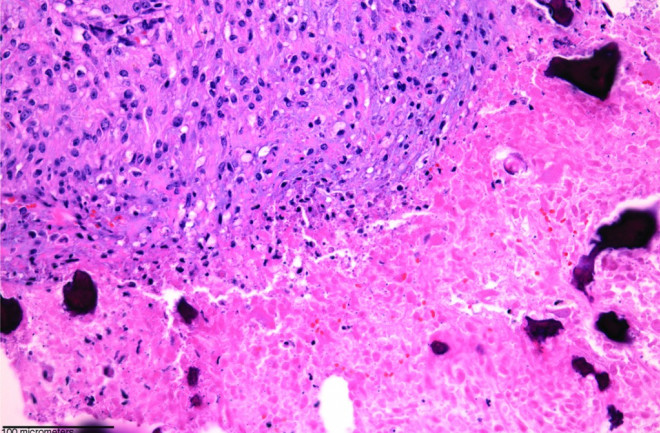 A stained dog tumor treated with the bacterium. Lighter pink areas areas denote tumor death. Credit: David L. Huso and Baktiar Karim of the Johns Hopkins Department of Pathology A bacterium found in soil that can cause flesh-ravaging infections in its natural state has been converted — with a few genetic tweaks — into a precise tumor assassin. Researchers from the Johns Hopkins Kimmel Cancer Center excised the toxin-producing gene from the bacterium Clostridium novyi, which, in its natural form, can be fatal when introduced to the bloodstream. They injected spores of the modified bacteria directly into tumors of mice, dogs and ultimately a human patient. In all three cases the spores germinated and released enzymes that ate the tumor from the inside out, resulting in either a significant reduction in tumor size, or complete eradication, without damaging healthy tissues. Scientists say that with this proof of concept the prospects for bacterial injection therapy, as a treatment in combination with anti-cancer drugs, has vastly improved.

The C. novyi bacterium was of special interest because it only thrives in oxygen-depleted environments, making it ideal for attacking oxygen-starved cells in a tumor. Crucially, the bacterial spores don’t germinate in healthy, oxygen-rich tissues so their destructive power is easily contained. Researchers started their experiment by implanting aggressive brain tumors in rats, then treating them with an injection of C. novyi spores. Within 48 hours the spores killed tumor cells while sparing healthy cells micrometers away. Rats treated with spores lived an average of 33 days after the tumor was implanted, compared to 18 days for untreated rats. Researchers then tested their treatment on dogs, because canine tumors are almost genetically identical to human tumors. They treated 16 dogs who had naturally occurring tumors with the spores, and six of the 16 experienced significant reductions in their tumor size. Three dogs’ tumors were completely eradicated. After this success, scientists decided to attempt the therapy on a human.

The first patient to receive this novel therapy was a 53-year-old woman who was diagnosed in 2006 with abdominal cancer, which had since spread throughout her body. Researchers targeted a tumor on her shoulder, and injected a treatment of the spores into her tumor. The treatment wasn't a walk in the park: the patient experienced severe pain in the shoulder, plus a fever as her body battled the bacteria. Eventually, her tumor formed an abscess that needed to be drained of fluid and debris. Two months after treatment her tumor showed all the signs of defeat, without evidence of a persistent infection. Results from her trial, however, are incomplete as she is still being monitored. Researchers published their findings this week in the journalScience Translational Medicine.

Researchers say the path forward for C. novyi is pretty clear. First, they need to further test its safety and efficacy in humans. Second, they want to identify other anticancer drugs and therapies that can be administered separately, but in conjunction with the bacteria to improve outcomes. It's a small, but hopeful, victory in the war on cancer, courtesy of some very tiny soldiers.