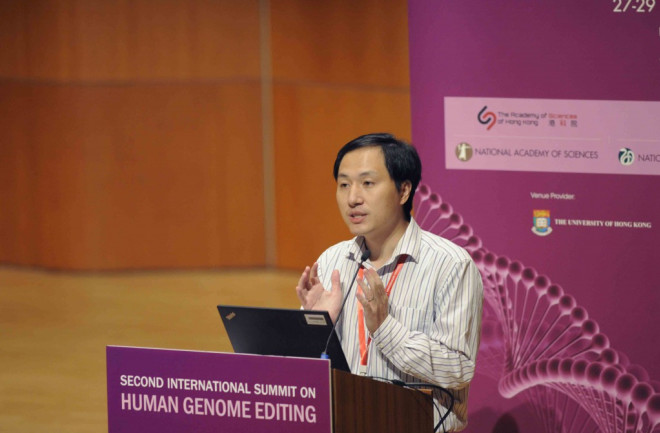 More than a dozen top scientists from seven countries are calling for world governments to adopt a moratorium on what scientists call heritable genome editing.

They’re on a mission to make sure the world doesn’t see any more gene-edited babies — not till we’re good and ready — and they’ve got a plan to stop it.

The group penned a commentary published Wednesday in the journal Nature. The effort was led by Eric Lander, director of the Broad Institute and a professor at both MIT and Harvard University.

Lander says the call is in reaction to the recent surprise announcement that a Chinese researcher had experimented with gene editing on actual humans. International scientists were shocked when He Jiankui revealed he'd edited the genes of twin girls who born in China last November.

Heritable genome editing has only recently been possible. It's when scientists alter the DNA of embryos — human cells that, if implanted in a uterus, will grow into a baby — in a way that permanently alters the DNA of every cell in the body. Changes here would also alter the DNA of generations to come.

In the most recent case, the babies had their genes edited using the popular tool CRISPR-Cas9, which allows researchers to target a specific gene and replace it with another. Many scientists hope the tool will eventually cure inherited diseases by replacing mutated, disease-causing genes with healthy ones.

But skeptics fear it will get taken too far, inevitably leading to “designer babies” with enhanced strength or intelligence. The Chinese scientist’s actions sparked near-universal condemnation from scientists, and strong reprimands from his own government, who some have speculated might punish him severely.

Chinese scientist He Jiankui talks with Matthew Porteus of Stanford University during a panel discussion after He presented his research in Hong Kong last November. (Credit: Ernie Mastroianni/Discover)

Another pressing concern is that even approved gene repairs could have unintended consequences.

Lander says that after He’s announcement that he worried “People were focused way too much on regulatory issues and not enough on how countries are going to make these decisions."

Lander added: "What was going to be a framework going forward for the years and decades ahead?”

Now, this group of scientists have outlined a potential framework for how nations of the world might come together to make decisions about how to regulate, and whether to allow, gene editing in humans.

“We think that each nation should voluntarily pledge not to allow any application of germline editing unless certain requirements are met,” they wrote.

But not everyone thinks this commentary was necessary. Some critics are calling the moratorium redundant, since clinical germline editing is already widely banned.

Scientists insert CRISPR into a human embryo in this artist’s illustration. (Credit: koya979/Shutterstock)

Lander called in a team of experts which included CRISPR co-inventors Feng Zhang and Emmanuelle Charpentier, as well as bioethicist Françoise Baylis, among others. The list also included Nobel Prize winner Paul Berg, who famously called for a moratorium on recombinant DNA after he discovered the tech in the 1970s. This super group of scientists says their proposal is aimed at world governments, not scientists. But that doesn’t mean scientists won’t react. George Church, another well known geneticist who was not involved with this latest effort, poked fun at the new call to action. “Hypothetically, there’s somebody like [Jiankui] He who’s gonna look at this and say, oh, the fact that I could get the death penalty in China, that’s not sufficient — but now that Paul Berg says it’s not okay, well, I’m definitely not gonna do it.” (It's still not clear what the Chinese laws and punishments are for creating gene-edited babies.) Shoukhrat Mitalipov, who is actively researching germline editing in human embryos for potential disease-curing applications, was more concerned that no embryologists or developmental biologists had offered their opinions. Experts in human reproduction and clinical genetics should be weighing in on these regulations because they're the ones actually researching human germline editing, he says.“I don’t like when people from different areas come and tell me how to do my job. Because they’re not experts,” says Mitalipov, who leads the Center for Embryonic Cell and Gene Therapy at Oregon Health and Science University in Portland. Berg, now professor emeritus at Stanford University, expected this reaction. “There will be people upset, I’m sure. ‘Who are you to tell me I can’t do this?’ We had that with the recombinant DNA [moratorium in the 1970s],” says Berg, recalling the reaction of people working in the field at the time. “[They] were saying, ‘you, a biochemist, are telling me how to deal with [my study organism]?’ ” This moratorium is only suggested to temporarily ban clinical applications of germline editing, that is, actual pregnancies creating actual gene-edited humans. Research in the laboratory, even with embryos, would proceed as far as is currently allowed. In fact, the group says they want research to continue. As Berg explains, the group is “calling for a yellow light going forward. Be prudent. Don’t do harm. And if you can’t be sure you’re not doing harm, hold off, and let the science progress. And as science progresses, we may reach a stage where we’re very confident it’s not going to produce anything deleterious.”

Critics point out that more laws aren’t going to make a difference if we already have laws in place. We need better enforcement, they say. “Clearly the prohibition isn’t sufficient. It’s kind of like saying, we should have another law on top of the laws we already have against speeding, against cars going too fast. Let’s have a triple layer law,” Church says. “That wouldn’t stop cars from speeding. What stops them is the radar.” Church also points out that it’s a felony to know about a major felony and not report it, with a nod to U.S. scientists who were revealed to know about He’s plans.

Jennifer Doudna, a pioneering CRISPR researcher from Stanford, listens to the presentations at a genome editing summit in Hong Kong. (Credit: Ernie Mastroianni/Discover) Jennifer Doudna, one of CRISPR’s inventors and a top researcher at the University of California, Berkeley, mostly agrees with what the group said in their call for action. But, she says, “I sort of feel that it’s a bit late to be calling for a moratorium. I’d like to actually see some international requirements and consequences to those requirements in place that would provide a real guideline forward for this whole field.” “My hope is that within this calendar year, those requirements and consequences are actually published,” says Doudna. “That will be a real advance, I think.” And Doudna is optimistic that there are realistic ways to steer scientists, outside of explicit legal barriers. That would include things like blocking research funding for science deemed unethical -- like the National Institutes of Health already does in the US -- or getting scientific journals to not publish work that violates ethical guidelines. In the academic world, funding and publication are “the pillars of our whole research enterprise,” Doudna says. Whatever these "requirements and consequences” end up being, they should be coming soon. Scientific societies from around the world, including the National Academies in the U.S., have now announced that they have plans in the works. Newly formed committees will, among other things, jointly define criteria for when germline editing would be appropriate. And the World Health Organization, the United Nations agency who deals with international public health, is convening an expert advisory committee that will work on issues related to human gene editing. They’re meeting for the first time next week in Geneva, Switzerland, to begin discussions about what standards nations will agree upon for when and why the technology is used on humans. The National Institutes of Health also released a statement published alongside the scientists’ proposal, with director Francis Collins, himself an influential geneticist, adding his support of the moratorium. The U.S. National Academies of Science and Medicine, as well as the United Kingdom’s Royal Society, weighed in. Their joint statement concludes: “We must achieve broad societal consensus before making any decisions, given the global implications of heritable genome editing.” Lander says he was impressed by this NAS response. “I thought that was a tremendous statement by the National Academies that scientists alone don’t have the authority to decide.” he says. “This has to engage society more broadly.”