Tongue Parasites to People of Earth: Thank You For Your Overfishing 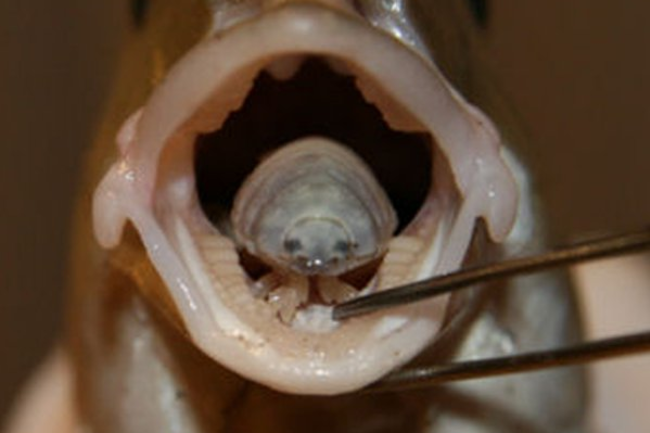 Whenever I give a talk about my book Parasite Rex, I try to gather together the creepiest images of parasites that I can. Every time, there's one kind of parasite that summons an instant reaction: a mix of laughter, sucked-in breaths, and gasps of recognition. I speak, of course, of the parasites that eat your tongue. I only mean you if you're a fish. Some species of isopods (crustaceans related to the less creepy crabs and lobsters) will swim into the gill of a fish, make their way to its mouth, and devour its tongue. It will jam its legs into the gills to hold itself in place, facing forward, its eyes gazing out of the fish's mouth, taking the very place of the tongue it just ate. I was first introduced to these disturbing creatures by Matthew Gilligan, an invertebrate zoologist at Savannah State University. I had come across a disturbing picture of one of these parasitic isopods in a paper he published in 1983 and sent him an email, asking questions about it. I wondered what the isopods did once they were done devouring the tongue. As far as Gilligan could tell, they stopped eating the fish once they had made a place for themselves in its mouth. Perhaps afterwards, they fed on the animals that the fish itself caught. After all, the fish that Gilligan and others had caught with these isopods were still alive and seemed healthy. Gilligan's response made me wonder if perhaps the fish simply used the hard-shelled back of the parasite as its own tongue. Since then, a new generation of scientists have studied these mysterious parasites, and it looks as if their dealings with their hosts are not as peaceful as once thought. In 2003, for example, scientists studying isopods in a fish farm off the coast of Turkey found that sea bass with the parasites in their mouths had lower blood counts than ones that still had their tongues intact. It seems that the isopods act like blood-drinking mouth leeches. In a new paper in the Biological Journal of the Linnean Society, British researchers have followed up on these studies with a big survey of the Mediterranean, inspecting striped sea bream for tongue parasites. They compared two populations of the fish that were closely related to each other but lived in very different environment. One population, off the coast of France, lived in a marine protected area. The other, off the coast of Italy, is heavily fished. In the protected waters, the scientists found, 30 percent of fish had the parasites in their mouth. In the fished waters, 47 percent did. Take a moment to let that sink in. Almost a third to almost half of these fish open their mouth and look as if they came out of a science fiction movie. Having recently just eaten bream for the first time, I'm relieved to find out that the parasite does not cause human disease. Still, next time I eat fish I may have some disturbing images in my head. The scientists found not only that there are more parasites in the heavily fished waters. They also found that parasites took a heavier toll there. Fish with tongue parasites ended up smaller and lighter in the heavily fished waters than infested fish in the refuge. These differences all seem to come down to fishing. A lot of studies on many species of fish have shown that heavy fishing can drive the evolution of small fish. Fish that get to be sexually mature faster may be more likely to have offspring than fish that take their time to reach bigger sizes. In that rush, harvested fish may end up unable to defend themselves against enemies, including tongue-eating parasites. It would be interesting to see what the rates of tongue parasites are in other heavily fished and protected parts of the world. If this pattern holds up, it may turn out that overfishing has made the world a more alien place. [Image: University of Salford]