Tomorrow belongs to the "Darwinists"?

The use of the word "Darwinist" is to catch the attention of Creationists, normally I'm not too warm to its usage in a scientific (as opposed to philosophical or historical) context. In any case, Jerry Coyne has a post up where he states:

The "new atheists" have been on the scene for exactly five years, beginning with Sam Harris's The End of Faith, published in 2004. But American's attitudes to evolution have been relatively unchanged (with 40+% denying it) for twenty-five years. This means two things.

This is true to a first approximation, and rather depressing. So I thought I would repeat a data finding which might cheer us up: the youngest adult age cohorts are the least Creationist.The GSS has 4 evolution related questions, EVOLVED, SCITEST4, SCITESTY and CREATION, and all seem to point in this direction. Below the fold I present the data, along with a few crosstabs by demographic variables & commentary. Here's a graphic that illustrates the topline trend: 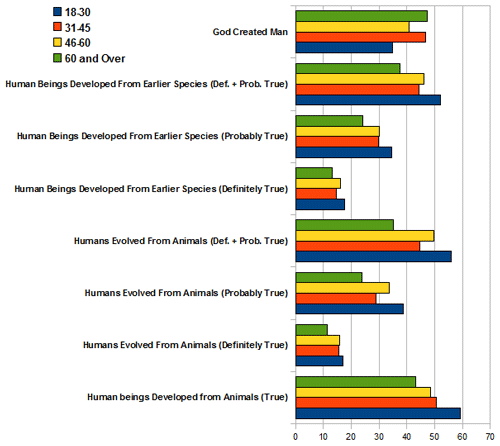 As you can see the change in attitudes toward evolution vary from group to group. The 60% of the GSS sample who "Know God Exists" is less Creationist in the lower age brackets. This is important because the proportion of those who are secular is higher among the young, so reduced Creationism could plausibly just be a side-effect of increased secularism among the young. But not so, as even religious youth are less Creationist than older age cohorts. But breaking down by Protestant vs. Catholic illustrates that while there has been little change among Protestants across age cohorts, young Catholics are much less Creationist than old Catholics. Finally, when it comes to politics there hasn't been much change among liberals, who in general are not Creationists, and some change among Conservatives, who are less Creationist among the younger age cohorts, but a large swing among moderates. Among the oldest age cohort self-described moderates are closer to conservatives than liberals in regards to Creationism, but among the youngest they've converged with liberals. All in & all, this leads me to have some guarded optimism for a change. Dembski et al. are losing the hearts & minds of the youth to Scott et al.

Limited to those who “Know God Exists