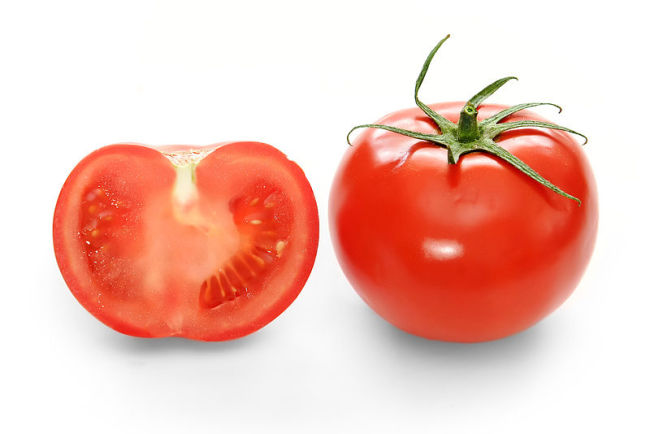 This story in The New York Times, Flavor Is Price of Scarlet Hue of Tomatoes, Study Finds, is pretty cool:

Yes, they are often picked green and shipped long distances. Often they are refrigerated, which destroys their flavor and texture. But now researchers have discovered a genetic reason that diminishes a tomato’s flavor even if the fruit is picked ripe and coddled. The unexpected culprit is a gene mutation that occurred by chance and that was discovered by tomato breeders. It was deliberately bred into almost all tomatoes because it conferred an advantage: It made them a uniform luscious scarlet when ripe. Now, in a paper published in the journal Science, researchers report that the very gene that was inactivated by that mutation plays an important role in producing the sugar and aromas that are the essence of a fragrant, flavorful tomato. And these findings provide a road map for plant breeders to make better-tasting, evenly red tomatoes.

Genetics for better living! But I had no idea that the laws in regards to mutant varieties were so retrograde:

But were the genetically engineered tomatoes more flavorful? Because Department of Agriculture regulations forbid the consumption of experimental produce, no one tasted them. And, Dr. Giovannoni says, do not look for those genetically engineered tomatoes at the grocery store. Producers would not dare to make such a tomato for fear that consumers would reject it. But, Dr. Powell said, there is a way around the issue. Heirloom tomatoes and many wild species do not have the uniform ripening mutation. “The idea is to get the vegetable seed industry interested,” Dr. Powell said.