Today Your Catheter Will Be Inserted By … a Robot 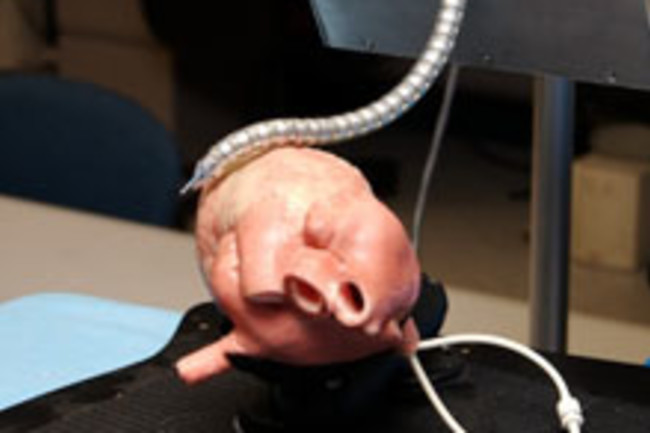 Robots may not only be cleaning your house and providing you with love and companionship in the coming years—they may also be performing your surgery. A team of engineers at Duke University have completed a set of feasibility tests that they call the "first concrete steps" toward making robot surgery a fully, er, operational process. The research team equipped a "rudimentary tabletop robot" with "eyes" that use 3-D ultrasound technology and hooked it up to an artificial "brain" that gave commands and processed real-time information. With the computer directing its actions, the robot was able to insert catheters into synthetic blood vessels and perform simulated needle biopsies. And, in the most recent experiment, the robot successfully touched a needle on the end of its arm to the tip of another needle inside a blood vessel graft. Robot surgery has been in the works since the early 1990s, with research labs like Carnegie Mellon's Center for Medical Robotics and Computer Assisted Surgery testing projects like 3-D Pre-Operative Planning Software and computer-based surgical assistants. Duke has been a key player in the robot doctor game, inventing in 1991 the 3-D ultrasound technique that has made it possible for robots to "see" the details they need in order to perform surgical tasks. Duke's researchers speculate that adding the 3-D capability to the more sophisticated surgical robots already in use by doctors could shorten the wait for autonomous robots operating on humans. Which may be good news given the looming doctor shortage. Photo courtesy of Chris Dannen