To Replace Beef Fat in Hot Dogs, Try Using Something Like Paper 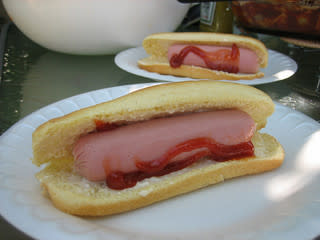 ). But they may take a turn for the weirder, should a new beef-fat substitute take off. It's a gel made from ethyl cellulose that combines the physical properties of beef fat with the nutritional properties of a postage stamp. Previous attempts to replace the saturated fat in hot dogs with unsaturated oils have yielded wiener jerky---tough, dense rods of processed meat. That's because, as Sarah Fecht at Scientific American wrote in her coverage of this discovery

, the way saturated fat cradles little droplets of oil in its spongy matrix is crucial to the dog's texture. (It is worth noting, incidentally, that it's not entirely clear that replacing saturated fats with unsaturated makes a big health difference

, which is the motivation for these kinds of switcheroos). A gel made from ethyl cellulose, though, which is a material similar to the cellulose in wood and plant matter, seems to be a pretty good mimic, Fecht writes:

The team subjectively compared the frankfurters' textures using a jawlike machine that compresses food between two plates. As the device squishes a sample, its resistance indicates how chewy it is—a property based on hardness, cohesiveness and springiness. When saturated fats were replaced with canola oil alone, the frankfurters were 30 percent harder and twice as chewy as regular franks. In contrast, when the canola oil was gelled with ethyl cellulose, it could replace saturated fats in the frankfurter without significantly impacting hardness and chewiness.

Best of all: in terms of food safety, it's just like "eating a little bit of paper," one researcher says. That might not sound so good, but cellulose makes up a good portion of fruit and vegetables, as well as paper. Fecht also notes that the ethyl cellulose gel patent was recently bought by Mars, of eponymous bar fame. Maybe it will wind up in your Snickers as well as your frankfurter.