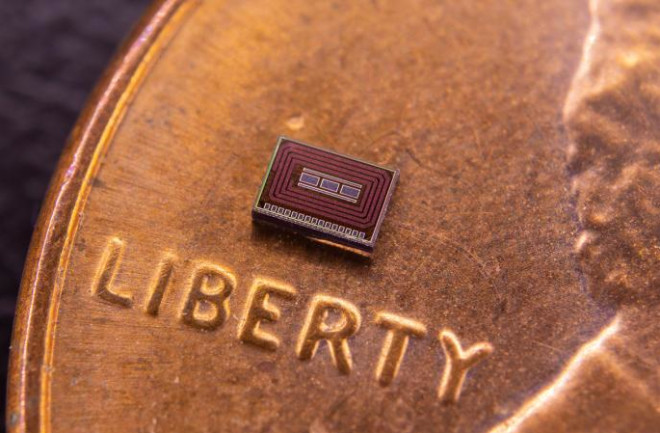 The alcohol-detecting chip with a penny for comparison. (Credit: David Baillot/UC San Diego Jacobs School of Engineering) A tiny chip implanted just under the skin could be the Breathalyzer of the future. Researchers from the University of California, San Diego reported today that they had created a tiny chip that can read levels of alcohol in the body and relay that information to a smartwatch. It could be an alternative to traditional means of detecting whether someone has been drinking, and offers users the ability to monitor their blood-alcohol levels in real-time. The chip, which hasn't been tested in humans yet, runs on just 970 nanowatts of power and measures about a cubic millimeter in size; small enough, the researchers say, to sit comfortably under the first layer of skin. It's powered by a smartwatch or external patch, meaning it doesn't need a battery, and relies on a coating of alcohol oxidase, which reacts with alcohol, to discern whether someone has been drinking. The oxidase catalyzes a chemical reaction between alcohol and oxygen, and the products of that reaction create an electrical signal that the chip's sensor measures. The test takes just three seconds a relies on a technique called backscattering to relay information. The smartwatch sends out signals which the chip modifies and reflects back, meaning it doesn't need to produce its own signal. Separate sensors monitor blood pH and other background signals to ensure the reading is accurate. The result is a minute-to-minute analysis of whether an individual has been drinking or is over the legal limit. The researchers presented their work today at the 2018 IEEE Custom Integrated Circuits Conference (CICC) in San Diego. Tests in samples of human serum covered by pig skin indicated that the chip functioned correctly, but it has yet to be tested in live animals or people. Devices that use interstitial fluid as a test for alcohol have been proposed before, but none appear to have made it to market yet. One extracted interstitial fluid from the skin using a vacuum to then analyze, while another relied on photothermal radiometry to assess blood alcohol concentrations in the interstitial fluid through the skin. Should the chip make it to market, it could be an improvement over what's currently available. Devices that measure blood alcohol levels based on exhalations are the current standard, but they're not totally accurate. The most common devices rely on a chemical reactions or infrared spectroscopy, but are not currently good enough to be used as evidence in a court case. Tests at a police station using more sophisticated equipment are required. While the researchers don't yet provide data on their chip's accuracy, they say that the ability to monitor blood-alcohol levels easily and consistently represents a step forward for the field. They see applications for people going through treatment for substance abuse, and hope to design versions that can detect other drug molecules in the body as well.