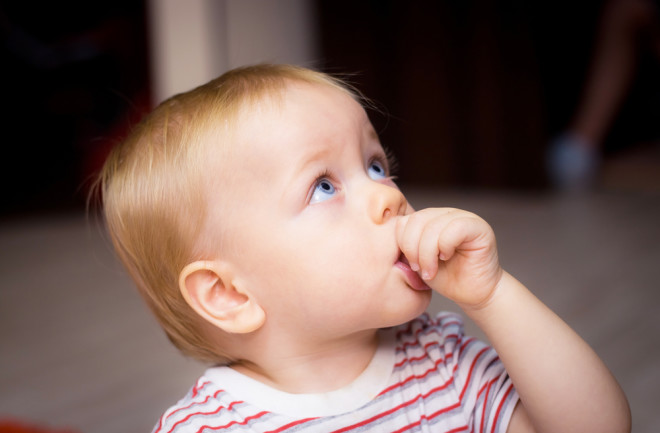 (Credit: gerain/Shutterstock) A new study on the possible health benefits of thumb sucking bolsters the decades-old, controversial "hygiene hypothesis," which claims that exposure to some bacteria early in life could improve health down the road. The latest results come from the Dunedin Multidisciplinary Study, which has followed more than 1,000 people in New Zealand over four decades. Researchers from the University of Otago used the data to see if thumb-sucking and nail biting, both common childhood behaviors, were correlated with lower rates of allergic reactions later in life.

Not Such a Bad Habit

After sifting through the data, the researchers found limited evidence to support the hygiene hypothesis. For the study, parents were asked to report thumb-sucking and nail-biting behaviors when children were between 5 and 11 years old, and the participants were tested for allergies via a skin test when they were 13 and 32. Researchers looked at a range of common allergies including dust mites, grass, cat and dog dander, molds and more — they didn't test for asthma or hay fever. After controlling for factors such as sex, pets, parental allergies, breastfeeding, inveterate thumb-suckers turned out to have fewer allergies. However, the correlation wasn't overwhelming: They study found that 38 percent of children who sucked their thumb or bit their nails had a skin reaction, compared with 49 percent who didn't. Further, the cohort study relied on subjective observations from parents who tracked hand-to-mouth habits at home. In other words, thumb-sucking is only a piece of the puzzle here, and researchers still couldn't identify the mechanism to explain why fingers in your mouth could prove to be beneficial. Less than identifying thumb sucking as a disease-fighting panacea, the researchers underline the impact the impact childhood behaviors have later in life. They published their work Monday in the journal Pediatrics.

How Clean Should We Be?

According to the hygiene hypothesis, proposed in 1989, the increased rates of allergies and autoimmune diseases in developed countries can be explained by our obsession with cleanliness. As the thinking goes, the immune system can be "trained" with small doses of a relevant pathogen so it can learn how to launch a defense — the more microbial introductions, the better. Still, it remains a controversial and unproven theory, with many questions still to be answered. Several epidemiological studies suggest that kids who grow up on farms are protected from asthma and hay fever. Sharing a bedroom as a child, or growing up with siblings could also bolster the immune system. But for the many studies supporting the hygiene hypothesis, there are just as many that fail to find evidence that that "less hygienic" behaviors provide a direct, protective effect. Some scientists have even proposed removing "hygiene" from the title to focus more attention on the health impacts of microbes, rather than endorsing unhygienic behavior. Other proposed methods to firm up our children's immune systems include breastfeeding, natural births, outside play and other allegedly "natural" behaviors. The rise in antibiotic use has been pinpointed as a factor as well, as courses of antibiotics kill off both good and bad bacteria in our bodies, and can affect our microbiome for up to a year. In all likelihood, exposure to bacteria via dirty fingers is only one of a confluence of factors regulating how our immune system behaves later in life. The authors seem to agree, stopping well short of suggesting a daily regimen of thumb sucking for young children. Rather, it seems thumb sucking may not be the dirty habit that it's often assumed to be.