A trio of patients land in the ER with a dislocated shoulder, a seizure and a heart attack. What could they possibly have in common? 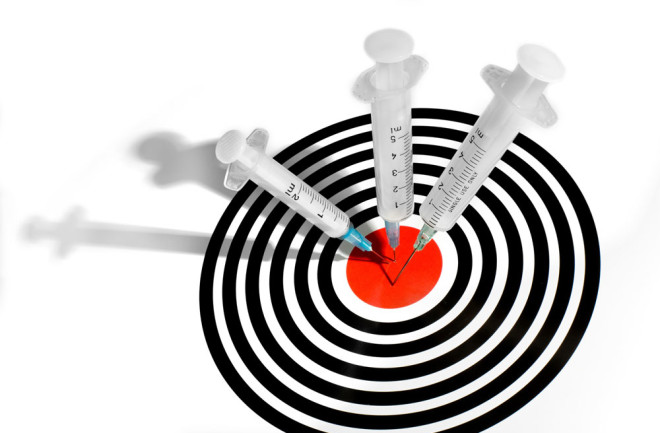 In retrospect, you can’t believe you missed it: three different days, the same diagnosis. They pop back into your head: the kid hanging off the chair, left arm askew; the three-piece-suit-and-briefcase guy, head jerking like a man with runaway Tourette’s; the 30-something Latino clutching his chest.

The kid showed up on a busting-at-the-seams Friday night.

“Doc, it kills. Oh gawd, it kills,” he wailed, cradling his left arm. The 20-something had a junior camp counselor look to go with his Long Island accent.

Obvious shoulder dislocation. Quick discharge. I grabbed him ahead of three other patients.

“Doc, you’re the best!” he cried. “How do I fix this? The shoulder keeps slipping out and dislocating. If only that drug addict hadn’t kicked me in the ambulance.”

“That junkie ended my career. Destroyed my rotator cuff.”

Clucking in sympathy, I eased his shirt off. A surgical scar bisected his left shoulder — likely a rotator cuff repair. Then I spotted the needle marks inside his elbow creases. He caught my surprise.

“The IV team at Methodist, doc.” He shook his head. “Last week they tried again and again to get some meds in and get my shoulder back in.”

A cell phone appeared in his right palm. “My brother is an anesthesiologist in Las Vegas. I’m sure he’d be happy to consult with you on my care.”

“Work with me and we can do this without medications,” I assured him. “We’ll have you out of here in a minute.”

“I’m with you, doc.” He jumped on the stretcher. Galvanized by my own persuasiveness, I began manipulating his arm to reduce the dislocation.

“Ow. You’re almost there, doc. Keep pulling. I can take it,” he groaned.

The second case — the businessman — rushed in, trailing a worried nurse.

“Sudden worst headache ever,” she cried. “Head keeps pulling to the side. Could be a seizure!”

For a moment, I wondered, Then why is he still clutching his briefcase?

His head jerked to the right, slowly came back, then whipped again. Was this a focal seizure? A brain hemorrhage can trigger headache and rhythmic contractions by provoking a patch of brain to fire to the body part it controls.

The only other clue was a scuba diving trip six weeks earlier. Was this a late symptom of the bends? Either way, it looked bad.

“Sir, we’re going to need a CT scan right away,” I told him.

Turning to May, my nurse, I said, “Let’s load him with Ativan and morphine and get him to CT.” Ativan, a cousin of Valium, would stop the focal seizures — if that’s what they were — and relax him for the CT scan. The morphine, well, was morphine.

The first doses went in. We waited 10 minutes.

“Let’s double the morphine and Ativan doses,” I ordered. May pushed the meds through the IV. The CT scan tech wheeled him off.

Third case: “A 37-year-old with chest pain. Heart attack two years ago.” Brian, my medical student, read off the triage note as we studied the EKG.

“No heart attack now,” I concluded. “Go ahead and see him.”

Fifteen minutes later, Brian was back. “Thirty-seven-year-old man, MI (myocardial infarction, or heart attack) in Puerto Rico two years ago. Got a right coronary artery stent. Done well since. Two hours ago, he felt crushing substernal chest pain radiating down his left arm. Took nitroglycerin three times without relief. Also complains of shortness of breath and a cold sweat. Pain is still 9 out of 10. No change with position or deep breathing. Father died of a heart attack at 45.”

“Wow, that’s a perfect story,” I remarked. A suspicion took shape. “Does he have his stent card?” Interventional cardiologists always give their patients a wallet card diagraming which coronary arteries they stented.

Long Island grimaced and tensed as I pulled his arm. “I’m with ya, doc,” he grunted.

I kept pulling. The bone seemed to clunk in but then kept slipping out again. The hallways were filling with new patients. “Take a breather,” I panted.

Ten minutes later, one of our anesthesiologists walked in.

“What are you doing here?” I asked.

“Do you have a patient with his arm turning blue?”

“The brother called me from Las Vegas.”

Flabbergasted, I thought, Did he complain? Was I in trouble? But then I saw an opportunity.

A nurse readied knockout doses of narcotics and sedatives. As the drugs went in, the kid’s eyes went all dreamy. His muscles relaxed; the shoulder slid back in.

As we slid the arm into a shoulder immobilizer, Long Island started coming around. Then he squirmed. The shoulder slipped out again. I swore.

The businessman came back from CT.

“I couldn’t do it,” the tech apologized. “He wouldn’t hold still.”

This was a nightmare. But what about the scuba diving? I Googled a diving information center and gave them a call. A laid-back, weathered voice came on.

“Neurological complications six weeks out? Wow, that’s a new one. Can I have the patient’s info?” I filled him in.

“Nothing here,” he apologized. “Yes, the bends can cause headaches and seizures, and in extreme cases coma, but not six weeks out.” No help.

Another idea: Maybe a contrast CT scan would show something. When dye is injected into the bloodstream, it lights up the cerebral arteries, making it easier to detect a leak.

The businessman’s head kept beating time. “Ow, doc. That pain is coming back.”

“OK, let’s bump up his meds this time,” I told May. “We’ll get the contrast scan and be done.”

May stopped, flicked a hand at the human metronome and gave me the look.

“Puerto Rico, is that right?” I asked.

“Yes, doctor,” the young cardiac patient answered politely. “They said I had a big heart attack.”

“Do you happen to have your stent card?” I asked.

Showing him the pink, glossy EKG, I said, “The good news is there is no heart attack.”

“Oh, that’s good.” He worked his palm into the left side of his sternum.

“Then why does it hurt so much?”

“We’ll give you another nitro.”

“I took the full three at home, doc!”

He grimaced with gusto. Then I asked, “Where were you treated?”

“Do you have your doctor’s phone number?”

Still kneading his chest, he eyed me with a new wariness. “I left my wallet at home, like I told you. Dr. Garcia.”

“OK, we’ll give him a call,” I replied briskly.

He probably figured the Centro Medico switchboard operators didn’t speak English (never mind that Garcia is the Puerto Rican version of Smith). What he didn’t figure was that I grew up in San Juan.

Two calls did the trick. Brian watched, then ventured, “The story wasn’t so perfect after all?” The nurse came over. “He wants something for pain. Just so you know, he asks you for nitro, but yelled at me for morphine.”

I went back, placed my hands on the stretcher rails and said to my patient, “There is no cardiologist named Dr. Garcia at Centro Medico.”

The shoulder wouldn’t go in. Desperate, I called the surgery residents covering orthopedics.

“Look, I get all my shoulder dislocations in, but this one won’t go,” I pleaded. “Can you help?”

Long Island surveyed the residents, the anesthesiologist, the nurse and me, and said in an aw-shucks tone, “I’m sorry to be such a bother, you guys.” He flashed a winning smile. “I do appreciate what you’re doing for me.”

The anesthesiologist drew up more morphine and propofol. As he pushed them into the IV, Long Island’s face relaxed, yet again, into bliss.

While he was under, a resident reached into Long Island’s pocket and fished out his cell phone. Holding it up, he showed everyone. “Last number called is the hospital paging operator. There is no brother in Vegas.”

May didn’t have to say anything.

“Sir,” I told the businessman, “we need to do a spinal tap. The CT scan was too blurry. It’s the only way we can diagnose a hemorrhage in your brain.”

“Then you’ll have to sign out against medical advice.”

“No spinal tap!” he screamed.

As he exited, briefcase in hand, head still whipping around, I wondered: Did a million-dollar lawsuit just walk out the door?

In the mid-1990s, American medicine rebooted its approach to pain. Driven by wrenching stories of undertreated terminal cancer patients, then boosted by patient support groups mostly financed by pharmaceutical companies, pain control morphed from symptom to cause célèbre. Government regulators and hospital boards jumped on the bandwagon. Now, with doctors’ pay tied to patient satisfaction scores, the pressure to prescribe first, ask questions later is relentless.

The predictable result? Roughly 16,500 deaths in 2010 from prescription narcotic overdoses. That’s four times the rate of 15 years ago. Prescriptions for narcotics have tripled in 10 years. Vicodin, a potent narcotic painkiller, is the No. 1-selling prescription drug in the country.

The U.S. — nearly 5 percent of the world’s population — ingests 80 percent of its narcotics.

My three patients all had the same diagnosis: drug-seeking. To an addict, the emergency department is a candy store. No, it’s even better: Cook up a dramatic story, drop a fake name and you get the goods on the house.

The Long Island kid? He could pop his shoulder in and out at will. When he woke up, we showed him the damning call log — he’d phoned the hospital paging operator pretending he was the Las Vegas doctor — and he went hollering and kicking all the way out the door. For an encore, he later called 911 to report a patient (himself) being abused in the ER. The businessman? A few weeks later, an uptown emergency department called. A worried doctor asked me about a scuba diving patient. This time, the caring doctor had mobilized an MRI team on a weekend and admitted the patient to intensive care before hitting on the spinal tap challenge. Now the overtrusting doctor was being investigated by the hospital for wasting resources.

And my fellow San Juan-er? When he realized no Dr. Garcia equaled no morphine, he stormed into the hallway. “F--- you!” he shrieked at the nurses. “I want an administrator! I want your names!”

Facing him just beyond fisticuffs range, I managed to hold him off until security arrived. The death toll from runaway narcotic prescribing is finally goading states from Maine to California to take action with mandatory checking of prescription histories and educational campaigns. But this plague is far from over.

Treating symptoms always has been — and always will be — easier than diagnosing disease. Opiate overprescribing proves how readily the finely balanced gyroscope of clinical reasoning can be thrown off-kilter by outside agendas. At the inception of scientific medicine, pain was respected as a vital clue to diagnosis, not a driver of patient satisfaction scores.

The cure for the opiate epidemic is unbiased thinking. It is an old remedy, this clinical judgment, and the best one ever invented.