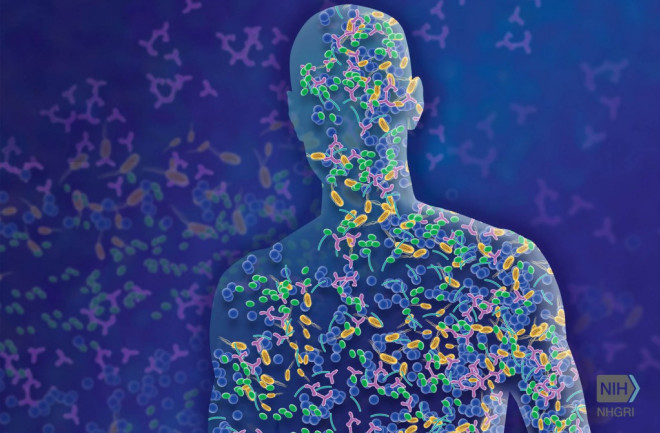 Microbes live in nearly every part of the human body. Now, scientists have drastically expanded the list of known species. (Credit: Darryl Leja/NHGRI)

In the largest study of its kind, scientists have uncovered thousands of new species inhabiting the human microbiome – -the extensive collection of bacteria, viruses and other micro-organisms that reside all over our bodies, influencing our health. And most of the newly discovered bugs live in and on people from non-Westernized populations. The discovery redefines scientists’ understanding of the human microbiome and could shed light on the increasing incidence of allergies, autoimmune diseases and other complex syndromes of the Westernized world, the researchers say.

“Our human microbiome co-evolved with mankind over millions of years, but the recent switch toward Westernized lifestyles comprising increasing hygienic conditions, access to antibiotics and other drugs, and introduction of high-fat diets, could have had an impact on our gut microbiome and, in turn, affect the human-microbiome symbiosis,” said Nicola Segata, a computational genomicist at the University of Trento in Italy, who led the new research.

“When sequencing the genetic content of the gut microbiome of an individual with the most advanced DNA sequencing machines, we – and others – were finding that a large proportion of the DNA fragments the machine was producing was not matching the genome of any known microbe,” Segata said. “A lot of the DNA of the human microbiome was thus ‘unmappable.’”

Segata and colleagues wanted to make the human microbiome as “mappable” as possible. So the researchers compiled a catalog of over 154,000 microbial genomes from large, publicly available datasets, as well as new ones they collected. The inventory involved samples from the skin, stool, vagina and oral cavity of people of all ages from 32 countries. Seven of the datasets were from non-Westernized populations, including a traditional agro-pastoral group from Mongolia, the Hadza hunter-gatherers of Tanzania and a traditional Fijian population.

When the researchers analyzed the new catalog, they uncovered almost 5,000 microbial species, 77 percent of which are completely new, the team reports today in the journal Cell.

“We were hoping to find some previously unexplored species,” Segata said. “But the amount and prevalence … went beyond our initial expectations.” The researchers estimate one of the new species is the seventh most prevalent intestinal microbe in the human microbiome.

Jack Gilbert, a microbiologist at the University of California in San Diego who was not involved in the new work, wants to know what’s driving those differences. “What are the eco-evolutionary drivers … that select for both species of bacteria and their function being found in people from southern Indian compared to these ones being found in people from Germany?” Gilbert said. With the results from Segata’s research, experts like Gilbert can now start to answer those questions.