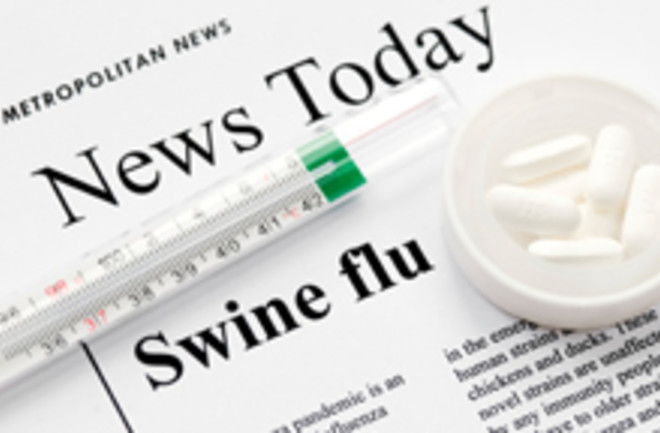 The week began with the news that Colombian president Alvaro Uribe had come down with swine flu while meeting with other South American leaders in Argentina. But Uribe is making a full recovery, and experts note that cases of the H1N1 flu

are starting to taper off along with the influenza season in the Southern Hemisphere.... "All countries report that after mid-July, disease activity in most parts of the country decreased," [Reuters],

according to a U.S. government report. Meanwhile, schoolchildren and college students across the Northern Hemisphere are heading back to school, and health officials are bracing for swine flu, round two. It's already cropping up where conditions are right.

Just as the football season is getting under way, Duke, Texas Christian and Alabama have reported cases of swine flu or of players experiencing flulike symptoms.... The strain tends to spread most quickly among young adults, who have not built an immunity to flu strains. Because the athletes share dorm rooms, cafeterias and sometimes unsanitary locker rooms, “it’s kind of an ideal situation for the flu,” said Artealia Gilliard, a spokeswoman for the Centers for Disease Control and Prevention [The New York Times].

Outbreaks were also reported at some colleges where women are attending sorority rush events before the start of classes. Colleges have put a number of contingency plans in place to deal with outbreaks, including swine flu buses to spirit away the sick to infirmaries and drive-up vaccination clinics that will open as soon as vaccines are available, probably in early October. City education departments are also kicking their preventive machinery into high gear. On Tuesday, New York Mayor Michael Bloomberg announced that

all primary school-age children in New York City will be offered free vaccines for seasonal and H1N1 flu this year [Reuters].

School officials in New York and elsewhere have said that they're reluctant to close schools, as they did in the spring during the pandemic's onset, because it disrupts parents' work schedules and does little to halt the spread of the virus. Swine flu is likely to infect more people than the typical seasonal flu this fall and winter, according to researchers who compared the two types of infections in ferrets and found that swine flu spreads more easily. However, the researchers also had good news: They say the H1N1 virus is

not likely to mix with other circulating flu viruses into a "superbug" as some had feared [Reuters].

Other researchers from the World Health Organization who have been tracking swine flu cases around the world say the virus has not mutated into a more virulent form. Vaccine companies are still racing to produce enough doses of a swine flu vaccine to protect those most at risk of catching the virus: children and adolescents, pregnant women, health care workers, and people with underlying health conditions like asthma.

Federal health officials have said the vaccine will not become available until mid-October, with about 200 million doses ready by the end of the year. The reach of those vaccines, however, could be shorter if testing indicates that people need two doses to develop immunity [The New York Times].

The virus has killed 40 U.S. children since April, but when researchers looked at the details of those pediatric deaths they came up against a puzzling fact.

Normally, half or more of the children who die from flu are age 4 and younger. But more than 80 percent of the kids who died with swine flu were 5 or older.... It's not clear why such a large percentage of the swine flu pediatric deaths are in kids aged 5 and older. It simply may be because older children were more likely to encounter the virus — at schools, summer camps — than very young children who spend more time at home [AP].

To get the word out to youngsters about how to avoid swine flu (including lots of hand-washing and other hygienic habits), the U.S. government has turned to a furry spokesman: Elmo, of Sesame Street. To reach a more mature demographic, researchers built a mobile app for the iPhone called Outbreaks Near Me, which allows users to track and report outbreaks of infectious diseases, including swine flu. Related Content: 80beats: This Week in Swine Flu: How Many Deaths, Vaccine in Sight & Tough Oldsters 80beats: Half of Americans Could Contract Swine Flu This Season 80beats: Study: Tamiflu Too Risky & Ineffective for Use by Children DISCOVER: Vaccine Production Is Horribly Outdated. Here Are 3 Ways to Fix It. Image: iStockphoto