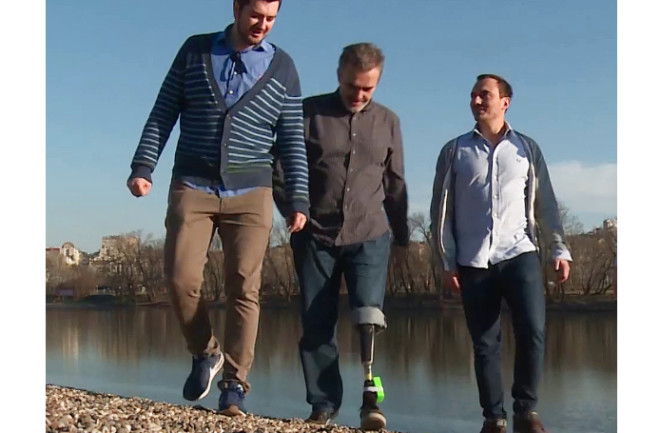 One of the study participants walking with a prototype of the new prosthetic leg. (Credit: Federica Barberi)

A new prosthetic leg integrates with a wearer’s nervous system to give real-time feedback about their environment. Users can report they can “feel” where their artificial leg is in space, giving them the ability to complete a range of tasks previously out of reach.

Researchers described tests with the new prosthetic in Science Translational Medicine this week in three patients with above-the-knee-amputations. They say it could lead to devices that mesh with our nervous systems to expand amputees’ abilities and restore feeling to missing limbs.

Over 4 million people in the U.S. and Europe have lost their legs above the knee, and those with this type of amputation can struggle with uneven gaits and phantom limb pain. While prosthetics provide a physical aid, they don’t provide the nuanced feedback that a normal limb does. Without feeling, that innate sense of where a body part is and what it’s doing — called proprioception — is missing.

To address those problems, study co-author Stanisa Raspopovic of the Swiss Federal Institute of Technology Zurich and his team embedded four electrodes into the thigh portion of the sciatic nerve, which runs from the spinal cord to the bottom of the foot. The electrodes connected to seven sensors at the bottom of the artificial foot and a chip in the knee joint. The processor integrated signals coming from the sensors and the nervous system and allowed the wearer to sense what their lower leg was doing, as well as articulate their knee and foot placement.

The devices felt so natural, the amputees started navigating with their new leg right away, Raspopovic says. “The coolest thing about this is that they don’t need training to use this device,” he says.

After attachment, the amputees guessed what part of their foot was being touched 90 percent of the time, and estimated the angle of their knee (when manipulated by someone else) 77 percent of the time. The recipients also walked up stairs and in a straight line and negotiated an obstacle course while blindfolded — performing all the tasks better than with a traditional prosthesis.

To see how much attention the limb required, the researchers asked wearers to identify specific sounds while walking — something they could only do correctly with the help of the neural feedback the limb provided. Though the recipients’ sense of their leg in space wasn’t perfect, Raspopovic knew the limb was doing well when a wire popped out of a prosthetic and the wearer said they had lost their knee.

As the popping wires prove, these legs are still experimental. The wires, for example, stuck out of wearer’s skin — an issue future designs will need to address. While it’s possible to fully embed the wires and sensors, that development will likely cost millions of dollars, says Raspopovic.

Future research will test how the devices fare over longer time spans and hopefully will recruit a larger cohort with fully implanted wiring, says Raspopovic. With more development, “similar technology would give the hope of better amputee health worldwide.”