Think getting your alcohol through an IV will prevent a hangover? Think again. 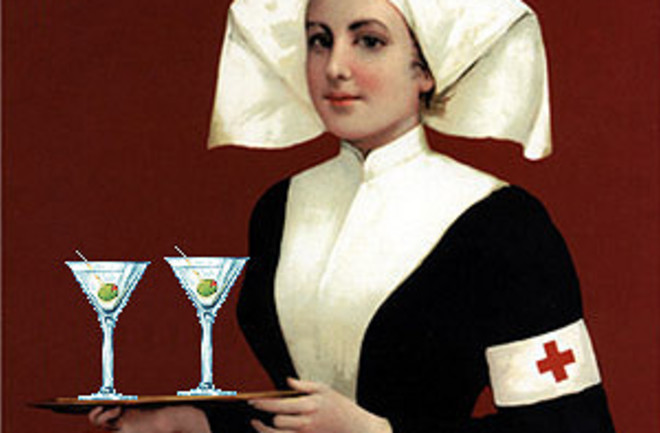 We've heard of "eyeballing," and even trying to get drunk by soaking your feet in vodka, but this is the first we've heard of getting drunk by IV. Thank goodness it's not for recreational purposes! These researchers wanted to know whether "drinking" alcohol through an IV -- a practice used for understanding the physiological response to alcohol -- would give similar hangovers as drinking the old-fashioned way. Turns out, it does. There goes our plan for Saturday night :(

Characterization of hangover following intravenous alcohol exposure in social drinkers: methodological and clinical implications. "Hangover refers to the cluster of physiological and behavioral symptoms that occur following the end of a drinking episode. While hangover has been studied after the typical oral consumption of alcohol, the occurrence of hangover following intravenous (IV) alcohol administration in human laboratory studies has not been previously reported. This study characterizes hangover symptoms and post-infusion drinking behavior following acute IV alcohol administration in social drinkers. Twenty-one to thirty-year-old healthy social drinkers (n = 24) underwent an alcohol clamp session at breath alcohol concentration of 0.06 percent. Hangover symptoms as well as any post-infusion drinking that occurred between the end of the session and the following morning were assessed using the Acute Hangover Scale, and examined for influences of recent drinking history, family history of alcoholism and Sex. Results indicated a 79 percent prevalence of hangover symptoms, with the most common symptoms being 'tired', 'thirsty' and 'headache'. Recent drinking measures showed significant effects on Average Hangover Scale scores, with heavier drinkers showing greater hangover symptoms. There was a significant sex difference in average hangover scores, with females reporting higher scores than males. Subjective measures of stimulation and intoxication were also associated with Average Hangover Scale scores. The probability of post-infusion drinking was not predicted by hangover scores, but was related to recent drinking history; subjective response to alcohol was a significant mediator of this relationship. These findings demonstrate that hangover symptoms are experienced following IV alcohol administration, and extend previous studies of influences of risk factors for alcohol use disorders including recent drinking on hangover." Related content: ‘Beauty is in the eye of the beer holder’: People who think they are drunk also think they are attractive.Oktoberfest week: The top 11 ways to appear drunk.Curvy vs. straight – which glass ups your drinking rate?