These Albino Lizards Are The First Gene-Edited Reptiles 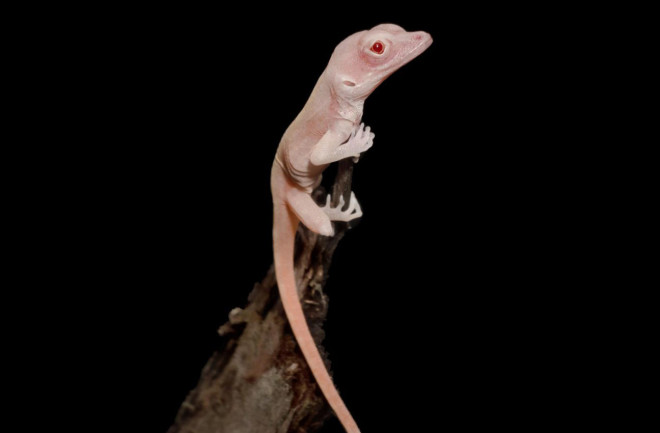 An albino lizard hatchling, one of the first to be gene edited with CRISPR. (Doug Menke)

Skittering among the Caribbean flora are anole lizards, tiny reptiles no bigger than a finger’s length. Sporting shades of grey, brown and green, island life has spurred the evolution of some 150 species there.

As a result, anole lizards have become a key scientific model for research into how reptiles develop and evolve. But scientists have been missing a critical element: the tools to investigate the genetics behind the lizards’ diversity.

Now University of Georgia researchers say they have created the world’s first gene-edited lizard. It’s an important step toward using lizards to study questions about development and evolution that other species may not work as well for.

Animals, and humans, have been gene-edited before. But editing reptiles’ genetics isn’t as straightforward. To create gene-edited mammals researchers inject CRISPR into freshly fertilized eggs when the embryo is still a single cell. Reptilian biology makes this a bit more difficult. Female lizards can store sperm inside their bodies for extended periods of time making it impossible for researchers to know when fertilization happens.

To overcome this barrier, Menke and colleagues developed a new approach. Instead of figuring out when fertilization was happening inside a lizard, the researchers used unfertilized eggs instead. They injected CRISPR into unfertilized eggs that were still attached to females’ ovaries. The gene-editing tool was then able to make edits to the DNA inside the eggs.

The technique was a success the researchers announced Tuesday in the journal Cell Reports. Menke and colleagues edited a gene for an enzyme that helps produce skin, eye and hair pigments. With the gene disabled, the pigments were absent, resulting in albino lizards. The approach worked even better than they had expected, in fact.

“Since we injected unfertilized eggs, we expected that we would only be able to perform gene editing on the DNA inherited from the mother,” Menke said. But the researchers found the CRISPR tools edited DNA from the mother and the father.

The breakthrough provides a model organism for the vision problems people with albinism experience. Folks with albinism have poor eyesight because the pit-like depression in the human eye called the fovea is absent or underdeveloped, Menke explained. The fovea helps make our vision sharp. But mice don’t have fovea. “In contrast the lizards we are working with hunt insects and need high acuity vision — their eyes have fovea,” he said.

Not only does the team’s approach open a new pathway for scientists to study albinism, but it may also help uncover the genetic roots of other genetic disorders. Understanding what genes underly anole lizards’ immense diversity may unveil how similar DNA changes in humans lead to birth defects, Menke says.

“Every species has its own unique stories to tell us,” Menke said. “With over 10,000 described species, reptiles have a lot to teach us – if we just take the time to look.”