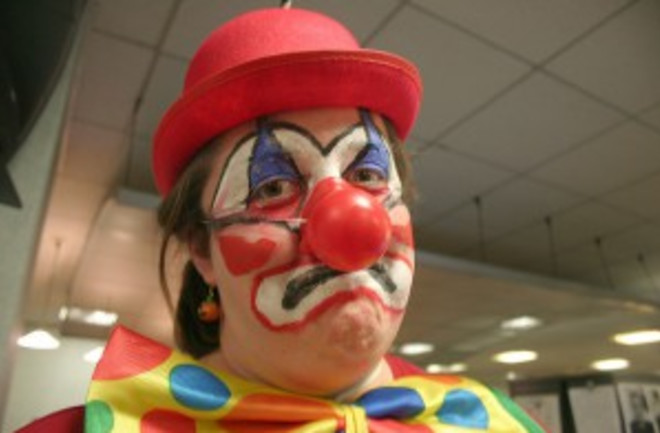 On occasion, doctors can be pretty insensitive. We previously reported on an unfortunately named butt rash called -- you guessed it -- "Baboon syndrome." And now this: a cancer of the nose that results in what doctors have compassionately termed "clown nose" (CN). Fortunately, the patient in the case study below turned out to be fine, but we wonder if he ever really recovered from being diagnosed with such a ridiculously named ailment.

Clown nose: a case of disfiguring nodular squamous cell carcinoma of the face. "'Clown nose' (CN) is the common medical term referring to a reddish-brown bulge involving the tip of the nose, reminding of a clown's fake red nose. Reports about these tumours are scarce. Most reports refer to metastatic skin manifestation of systemic malignancies: this condition has been rarely described as a primary skin neoplasm. We report a case of a 31-year-old patient with a giant cutaneous squamous cell carcinoma of the nose which evolved into a CN. After ruling out genetic or immune risk factors, the patient was treated with surgical excision of the lesion and local reconstruction with good aesthetic outcome and no recurrence over a 2-year follow-up." Related content: Hairy elbows syndrome: yup, it’s a thing.Halloween special feature: from the haunted scrotum to the spooky pelvis.NCBI ROFL: Hmmm…what should we call this new butt rash?