The year of the Other human

An international team of scientists has identified a previously shadowy human group known as the Denisovans as cousins to Neanderthals who lived in Asia from roughly 400,000 to 50,000 years ago and interbred with the ancestors of today’s inhabitants of New Guinea..

The most significant finding in the paper is the demonstration that some living humans trace significant fraction of their ancestry to the population represented by the Denisova genome. As in the case of Neanderthals, different human populations show significantly different levels of similarity to the Denisova sequence. For Neanderthals, the similarities indicated between one and four percent Neanderthal ancestry for living people outside of Africa. In the case of the Denisova sequence, the greatest similarities are with living people in Melanesia – in this paper, represented by genome samples from Papua New Guinea and Bougainville. The similarities are consistent with approximately 4% contribution of a Denisova-like population to the ancestry of these living Melanesians.

The paper, Genetic history of an archaic hominin group from Denisova Cave in Siberia. It isn't open access, but I assume the supplements are. 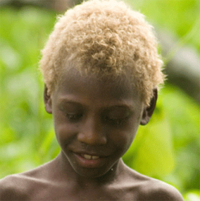 I'll have more later after the media gets its fill. Update: Wired. Dienekes. Nature. Gated, but another Nature piece. Update II: This doesn't work yet: http://genome.ucsc.edu/Denisova. But this does: http://bioinf.eva.mpg.de/download/DenisovaGenome.