I'm not a fan of professional sports. I find the whole scenario of people rooting for their local team, consisting of a bunch of (generally egregiously overpaid) athletes that have no particular connection to their "hometown", somewhat absurd. I can't even watch the Olympics anymore, since it seems like a two-week long promotional ad, with a few minutes of mind-blowing athleticism thrown in now and then. I generally prefer playing sports than watching others do so. 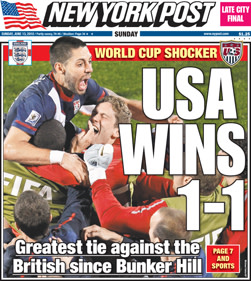 However, I confess that I absolutely love the World Cup. I love that the entire world (with the possible exception of the US) becomes mesmerized. Europe and the Americas are well represented. But so are Africa and Asia. Even North Korea managed to qualify. I love that the games are shown without interruption: two 45 minutes halves (plus extra time), with no break for commercials. Just nonstop football/soccer. Yes, the uninitiated complain that almost nothing ever happens. But they are missing that something is always happening. The game is relentless. These are amazing athletes, from all corners of the globe, playing with no rest for 45 minutes straight. There is individual brilliance. There is brilliant teamwork. Granted, the rash of 0-0 games has been disappointing. Although play is generally exciting, it's still fun to have a goal now and then. Especially if you're forced to watch in the 3:30am--5:30am slot, as we are in Asia. Clear evidence that the whole world is watching can be found in the advertisements which appear on the billboards circling the field. There are, of course, familiar names. But there are plenty of advertisements that, at least for me, spark no recognition whatsoever: Mahindra Satyam, Continental (not the airline), MTN, Seara, and an ad in Chinese that I couldn't even read. It tells you something when someone is paying for what must be some of the most expensive advertising real estate anywhere, anytime, and the vast majority of the "West" can't even read the ad. This is truly the world's game. Despite the United States' protestations (e.g., the "World" Series) otherwise.