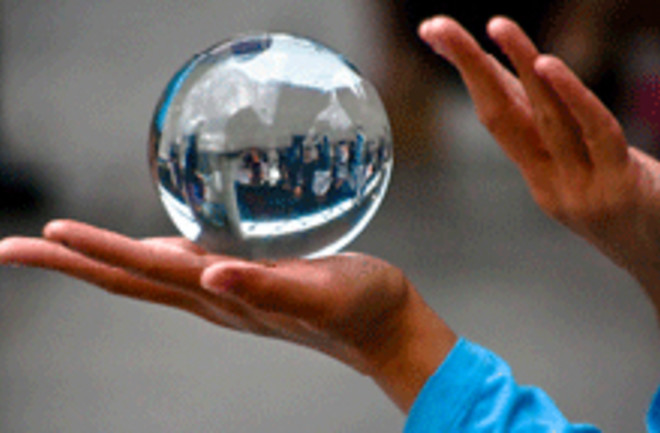 Look into the future and see the women of tomorrow! A new study predicts that future women will be a tad shorter, heavier, and more fertile—that is, if the women who are currently most successful at producing children are any indication.

The team studied 2238 women who had passed menopause and so completed their reproductive lives...[and] tested whether a woman's height, weight, blood pressure, cholesterol or other traits correlated with the number of children she had borne. They controlled for changes due to social and cultural factors to calculate how strongly natural selection is shaping these traits [New Scientist].

Their results show that shorter, heavier women tend to have more children, as do women with lower blood pressure and cholesterol. If the mothers pass on these traits for 10 generations, the average woman in 2409 will be 2 centimetres shorter and 1 kilogram [about 2 pounds] heavier than she is today. She will bear her first child about 5 months earlier and enter menopause 10 months later

A two-centimeter decrease over 400 years may be a modest change, but the researchers say it's evolution in action.

The study will be published in Proceedings of the National Academy of Sciences.

The finding jibes with previous research showing that shorter women are more likely to have long-term relationships with men, and are also more likely to have children (however, that study was based on British people that are now over 50 years old, so it's not clear if this trend extends to younger generations, or other cultures). Researchers really have no idea why men seem to be drawn to shorter women, but

Daniel Nettle, who led the research that s

"We know that men are drawn to things that in our evolutionary past would have been a cue for fertility. And in one sense tallness is a negative cue—

However, he stresses that scientists do not have a firm grasp on the genetics of height, so the real answer is undoubtedly more complex.