The War on Cancer Phobia

is an international consultant in risk perception and risk communication, and an Instructor in the Environmental Management Program at the Harvard University Extension School. He is the author of How Risky Is It, Really? Why Our Fears Don’t Always Match the Facts and principal co-author of RISK A Practical Guide for Deciding What’s Really Safe and What’s Really Dangerous in the World Around You. He writes the blog Risk; Reason and Reality at Big Think.com and also writes for Huffington Post,Psychology Today, and Scientific American.

He founded the program “Improving Media Coverage of Risk,” was an award-winning journalist in Boston for 22 years and a Knight Science Journalism Fellow at MIT.

This post originally appeared on Soapbox Science, a guest blog hosted by the nature.com Communities team.

If you were to be diagnosed with cancer, how do you think you would feel? It would depend on the type of cancer of course, but there’s a good chance that no matter the details, the word "cancer" would make the diagnosis much more frightening. Frightening enough, in fact, to do you as much harm, or more, than the disease itself. There is no question that in many cases, we are cancer-phobic, more afraid of the disease than the medical evidence says we need to be, and that fear alone can be bad for our health. As much as we need to understand cancer itself, we need to recognize and understand this risk, the risk of cancer phobia, in order to avoid all of what this awful disease can do to us. In a recent report to the U.S. National Institutes of Health (NIH), a panel of leading experts on prostate cancer, the second most common cancer in men (after skin), said;

“Although most prostate cancers are slow growing and unlikely to spread, most men receive immediate treatment with surgery or radiation. These therapeutic strategies are associated with short- and long-term complications including impotence and urinary incontinence.”“Approximately 10 percent of men who are eligible for observational strategies (keep an eye on it but no immediate need for surgery or radiation) choose this approach.”“Early results demonstrate disease-free and survival rates that compare favorably (between observation and) curative therapy.”“Because of the very favorable prognosis of low-risk prostate cancer, strong consideration should be given to removing the anxiety-provoking term ‘cancer’ for this condition.”

Let me sum that up. Many prostate cancers grow so slowly they don’t need to be treated right away…the unnecessary treatment causes significant harm…and one of the reasons nine men out of ten men diagnosed with slow-growing prostate cancer accept, indeed choose these unnecessary harms, is because “cancer” sounds scary. Consider more evidence for cancer phobia. In “Overdiagnosis in Cancer,” doctors at Dartmouth classified “25% of mammographically detected breast cancers, 50% of chest x-ray and/or sputum-detected lung cancers, and 60% of prostate-specific antigen–detected prostate cancers,” as "overdiagnosed," which they defined as “1. The cancer never progresses (or, in fact, regresses) or 2. The cancer progresses slowly enough that the patient dies of other causes before the cancer becomes symptomatic.” The doctors described the negative health effects such patients suffer from a range of treatments that often involve radical surgery and noted; “Although such patients cannot benefit from unnecessary treatment, they can be harmed.” Add to those harms the damage from stress caused by the diagnosis of cancer, or even the fear of getting it. Chronic stress raises blood pressure and contributes to heart disease. Even more directly as regards cancer, chronic stress weakens the immune system, the very system our bodies need to help prevent, fight, or recover from, the disease itself. and beyond these harms to individual patients, consider the cost of cancer phobia at the societal level. 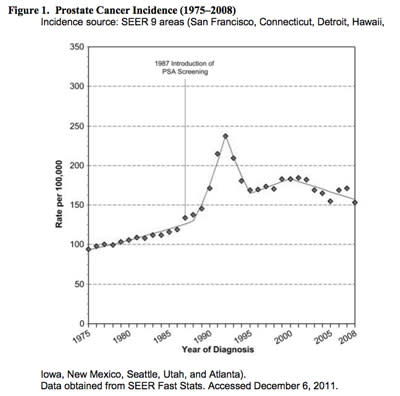 The basic biological mechanics of what causes both cancer and heart disease are still inadequately understood and need fundamental research. But the U.S. National Institutes of Health spend about four times as much on cancer research as on heart disease research, despite the fact that heart disease kills about 10% more people (60,000 each year, 25 per day), than cancer. We are spending far more on the second leading cause of death than we are trying to figure out what is much more likely to kill us. Despite all the progress we’ve made on cancer, a recent Harris poll

found that cancer is the most feared disease in the U.S., 41% to Alzheimer’s 31%. (Only 8% of American are most afraid of the leading cause of death in the U.S., heart disease). In August 2011, Cancer Research UK

found 35% of Britons feared cancer most, followed by Alzheimer’s at 25%. And this fear is hardly new. 40 years ago the U.S. National Cancer Act of 1971, which declared "War on Cancer

" said “…cancer is the disease which is the major health concern of Americans today.” Cancer phobia goes even further back. The term itself was coined in an article by Dr. George Crile, Jr., in Life magazine

, in 1955, “Fear of cancer and unnecessary operations.” His insights describe conditions today as accurately as they did then: “Those responsible for telling the public about cancer have chosen the weapon of fear, believing that only through fear can the public be educated. Newspapers and magazines have magnified and spread this fear, knowing that the public is always interested in the melodramatic and the frightening. This has fostered a disease, fear of cancer, a contagious disease that spreads from mouth to ear. It is possible that today, in terms of the total number of people affected, fear of cancer is causing more suffering than cancer itself. This fear leads both doctors and patients to do unreasonable and therefore dangerous things.” Unfortunately, Dr. Crile overlooked the key truth about our fear of cancer: Cancer phobia is hardly just the product of zealous health and environmental advocates magnified by media alarmism. It comes from the innate way we perceive all risks, a process that relies not only the statistical and medical facts, but on how those facts feel. Risk perception is a blend of conscious reasoning and subconscious instinct, and neuroscience suggests that between the two, instincts and emotions have the upper hand. While we’ve been busy studying cancer, we have also learned a lot about the specific psychological characteristics of cancer that make it particularly frightening. The more pain and suffering a risk involves, like cancer, the scarier it is. The less control over a risk we feel we have, the scarier it is. Despite great medical progress, cancer is still something that too often can’t be controlled. It is still widely assumed that a diagnosis of cancer is a death sentence. The more a risk feels imposed on us, rather than the result of something we did by choice, the scarier it is. Many people continue to believe that a majority of cancers are "done to us" by outside forces, despite the medical evidence that environmental cancers (beyond those caused by our lifestyle choices of diet and exercise) make up perhaps 10--15% of all cases. The greater our "mental availability" about a risk---how readily the risk comes to mind---the scarier it is. Cancer is constantly in the news. And the very mention of the word "cancer" is instantly overwhelmingly negative, a psychological effect called stigmatization that makes it difficult for us to think about things objectively. “Cancer” is no longer the automatic death sentence it was once feared to be. From 1990 to 2010 the overall death rate from cancer in the U.S.has dropped 22% in men and 14% in women

, (even while the incidence rate in the UK have increased 22%). We have learned an immense amount about cancer, allowing us to treat, or even prevent, some types that used to be fatal. But we have also learned a great deal about the psychology of risk perception and why our fears often don’t match the evidence. We are failing to use that knowledge to protect ourselves from the significant, tangible health risks of our innately subjective risk perception system. The proposal of the NIH panel to replace the “C” word with something else that is medically honest but emotionally less frightening is a tiny first step in the right direction to open a new front in the War on Cancer: the battle against cancer phobia.

Image courtesy of the NIH