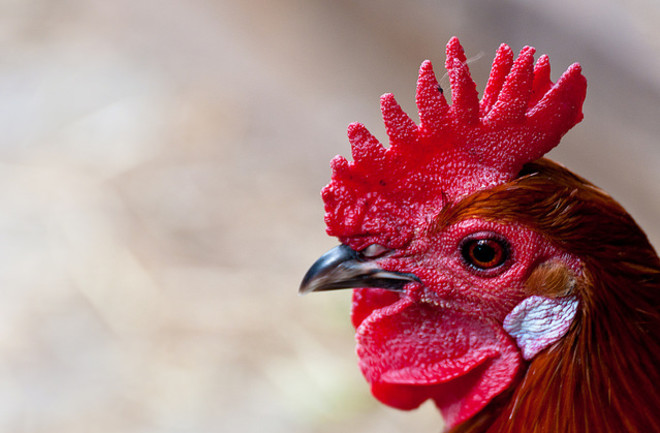 Image: Flickr/Staffan AnderssonThe hierarchical nature of chicken society is well known (cue "pecking order" joke). But did you know it even controls behaviors as deeply rooted as crowing at dawn? Well, this study suggests just that: these scientists got up very early over many days to watch groups of chickens and recorded who crowed when. The researchers found that even when other roosters are awake and raring to crow, they will wait until the highest-ranked rooster crows first. But if the top-ranking cock disappears, the next in line will assume the first position and crow first.The highest-ranking rooster has priority to announce the break of dawn. "The "cock-a-doodle-doo" crowing of roosters, which symbolizes the break of dawn in many cultures, is controlled by the circadian clock. When one rooster announces the break of dawn, others in the vicinity immediately follow. Chickens are highly social animals, and they develop a linear and fixed hierarchy in small groups. We found that when chickens were housed in small groups, the top-ranking rooster determined the timing of predawn crowing. Specifically, the top-ranking rooster always started to crow first, followed by its subordinates, in descending order of social rank. When the top-ranking rooster was physically removed from a group, the second-ranking rooster initiated crowing. The presence of a dominant rooster significantly reduced the number of predawn crows in subordinates. However, the number of crows induced by external stimuli was independent of social rank, confirming that subordinates have the ability to crow. Although the timing of subordinates' predawn crowing was strongly dependent on that of the top-ranking rooster, free-running periods of body temperature rhythms differed among individuals, and crowing rhythm did not entrain to a crowing sound stimulus. These results indicate that in a group situation, the top-ranking rooster has priority to announce the break of dawn, and that subordinate roosters are patient enough to wait for the top-ranking rooster's first crow every morning and thus compromise their circadian clock for social reasons." Related content: An autopsy of chicken nuggets.Want to avoid malaria? Just wear a chicken.How to grow baby chicks using plastic wrap instead of an eggshell.