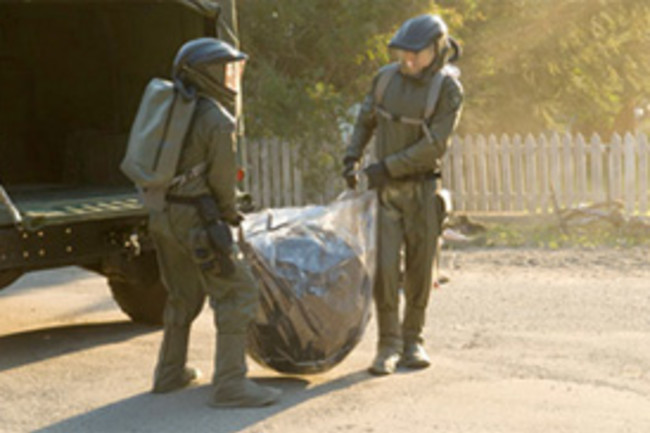 Given the recent death of best-selling author and sci-fi pioneer Michael Crichton, we thought it was the perfect time to reflect on some of his most innovative and fascinating ideas...that just happened to have come true. 5. Talking Gorillas: Congo (1980) was more than just another notch into the decent-book-cum-awful-movie belt. It also highlighted what was once a novel concept: that apes could use human language to communicate. Cute little Amy, with her sign language glove (which appeared in the movie but not the book), was loosely based on Koko the gorilla, whose actual linguistic abilities continue to be debated. Since then, there's been Kanzi, a bonobo who "apparently has learned more than 3,000 spoken English words and can produce (by means of lexigrams) novel English sentences and comprehend English sentences he has never heard before." Granted, those who doubted before remain unconvinced. 4. Self-Replicating Robots: In Prey (2002), Crichton created a world of self-replicating nanorobots with rudimentary intelligence and predatory instincts, who spend several hundred pages running amok and causing all sorts of mayhem. Today, researchers have developed robots that can physically self assemble, and even produce copies of themselves. Granted, getting to that next stage—manufacturing more of themselves from raw materials—is substantially harder. 3. Superbugs from Space: Crichton's debut novel, The Andromeda Strain (1969), terrified readers with the ultimate biohazard: a deadly extraterrestrial microorganism that infects human blood and mutates like wildfire to defy containment. Lucky for us, the chances of the next pandemic hurling in from space are slim to none. But the book brought the concept of bio-safety levels to far more advanced heights. As for the next great bug, not only have we created antibiotic-resistant superbugs here on Earth, we’ve also discovered that some strains become more virulent when sent into space. (Though fear not: They become far less deadly once they've made the journey home.) 2.Brain Implants: Crichton's 1972 thriller The Terminal Man was far ahead of its time. The hero, suffering from "thought seizures" after a car accident, undergoes a procedure in which electrodes are implanted in his brain. Unfortunately, since the electrodes also stimulate his pleasure center, the implant winds up doing far more harm than good. Today, electrode-studded swim caps let people control robots using only their thoughts, and brain implants are not only real but can be used to help deaf people hear and blind people see—and may be the future of treatment for depression and other mental disorders. 1.Cloning Dead (Or Even Extinct) Animals: First prize goes to the eponymous Jurassic Park (1990), in which science-minded billionaire John Hammond concocts a scheme to clone dinosaurs using DNA extracted from prehistoric mosquitoes. The dinos are created/hatched, the park is opened, and the inevitable happens. Dinner, anyone? Skip forward to today, where scientists have successfully cloned mice that have been dead and frozen for 16 years. There's even talk of cloning long-extinct woolly mammoths. And let's not forget cryogenically frozen humans (Ted Williams, we hardly knew ye). Image: Screenshot from A&E’s television version of The Andromeda Strain.