The social & genetic construction of race

Dienekes points to a paper by Yann, Estimating Genetic Ancestry Proportions from Faces:

Ethnicity can be a means by which people identify themselves and others. This type of identification mediates many kinds of social interactions and may reflect adaptations to a long history of group living in humans. Recent admixture in the US between groups from different continents, and the historically strong emphasis on phenotypic differences between members of these groups, presents an opportunity to examine the degree of concordance between estimates of group membership based on genetic markers and on visually-based estimates of facial features. We first measured the degree of Native American, European, African and East Asian genetic admixture in a sample of 14 self-identified Hispanic individuals, chosen to cover a broad range of Native American and European genetic admixture proportions. We showed frontal and side-view photographs of the 14 individuals to 241 subjects living in New Mexico, and asked them to estimate the degree of NA admixture for each individual. We assess the overall concordance for each observer based on an aggregated measure of the difference between the observer and the genetic estimates. We find that observers reach a significantly higher degree of concordance than expected by chance, and that the degree of concordance as well as the direction of the discrepancy in estimates differs based on the ethnicity of the observer, but not on the observers' age or sex. This study highlights the potentially high degree of discordance between physical appearance and genetic measures of ethnicity, as well as how perceptions of ethnic affiliation are context-specific. We compare our findings to those of previous studies and discuss their implications.

At this point ancestrally informative markers are rather powerful and precise. You can ascertain whether someone is a half-Jew or full-Jew, or Uyghur. That's the genetic reality. Population substructure is reflected in the patterns of genetic variation, which map onto preexistent geographically derived categorizations. But racial categories are also social constructions, and the correlation between total genome content and salient phenotypes which we use to "code" racial identity is imperfect. This is why fraternal twins can be categorized as separate races, and subjectivity results in different individuals coding the same individual differently. This study uses 14 individuals of "Hispanic" background because to a great extent this relatively new constructed category in the United States is of hybrid origin. This results in a very high level of extant phenotypic (and presumably genotypic) variance within the group. If genes map onto appearance one would expect a rough correspondence between ancestral blood quanta and phenotype. There seems to be such a thing for African Americans; the more white ancestry one has, the more white characteristics one has. In this sample individuals with more Native American ancestry should be more Native American in appearance, and outside observers should note this. What did they find? 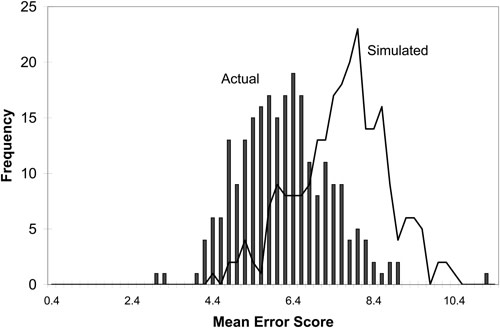 The solid line shows the estimates that the observers should have made if they randomly guessed how much Native American ancestor any of the 14 Hispanics had. The further the right, the greater the error. As you can see the observers guessed better than random; this suggests that there was a correlation between appearance and ancestry. There is something interesting in the pattern of how the observers made errors though.... 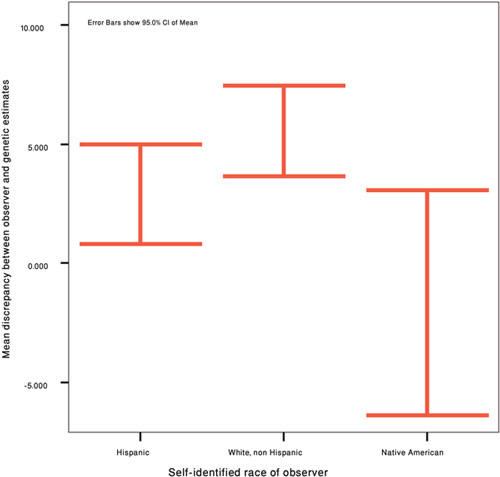 The confidence intervals are big for Native Americans, but here you see that observers who were non-Hispanic white overestimated Native American ancestry, and Native Americans underestimated it. This goes to what I have alluded to multiple times: there is a subjective weighting in the importance of various characters which results in one's perception of someone's racial identity. But there's something else that's important here in the paper:

This study shows that the degree of concordance between genetic and observer estimated Native American ancestry proportions for individuals in this sample of New Mexicans is slightly but significantly higher than if observers were to estimate randomly. The error in estimation by the observers (6.07) is much closer to random estimation (7.49) than it is to perfect estimation (0.36), suggesting either that facial features are not perfectly reliable indicators of ancestry as was shown in Brazil...or that individuals are not very closely attuned to the phenotypic cues of group differences. We discuss our findings, relate them to previous findings, and discuss their implications regarding human social behavior.

Though it seems that there was some ability to estimate ancestry based on appearance, the correspondence between blood quanta and appearance does not seem particularly high. The paper goes on to clarify why this might be:

These results also have implications when considering the history of admixture, sexual selection, and the genetics of complex traits. For example, it may be that after several generations of sexual selection for facial appearance, the genetic variants that are responsible for those traits would no longer be in linkage disequilibrium with other population-specific genetic variants...This process would result in dissociation between these traits and the estimate of genetic admixture for the rest of the genome. Depending on their specific history, populations differ in how they are stratified with respect to admixture. This will affect the strength of the correlation between genetic admixture estimated from genetic markers scattered throughout the genome and any phenotypes that differ between parental populations. Factors such as a long time since initial admixture, non-continuous gene flow, and assortative mating will decrease the degree of admixture stratification, and hence the relationship between overall admixture and phenotypes that are different between parental populations and that are controlled by just a few loci....

Over the past few years there have been several cases of black & white twins. That is full-siblings who favor one parent over another in appearance to the point where one would naively classify them as racially distinct. If it happens that in the future the white halves of these dyads pair up with each other, and the black halves with each other, their offspring will all be about ~50% African and ~50% European, but likely to an outsider it would be as if there are two distinct populations here. This is an extreme case, but it illustrates the general principle.