The 'Silent Epidemic' of Valley Fever in the Southwest U.S.

The Centers for Disease Control and Prevention has seen an uptick in valley fever, a potentially fatal dust-borne infection. 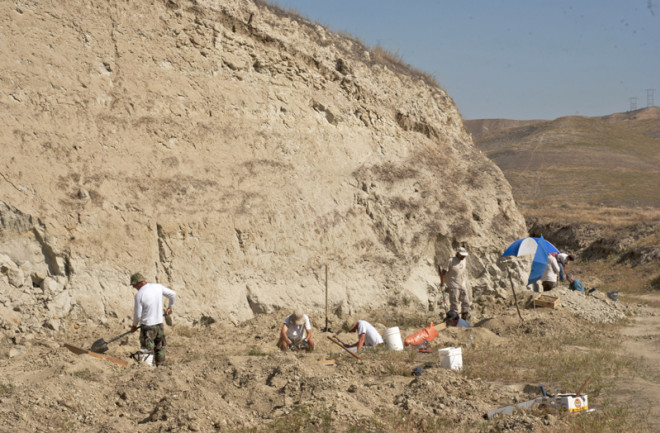 Researchers look for fossils at Sharktooth Hill near Bakersfield, Calif. The area is known to harbor cocci spores that can cause valley fever. | Chuck Ciampaglio/Wright State University

Valley fever, a potentially fatal dust-borne infection caused by a soil-dwelling fungus,has lurked in the deserts of the Southwest United States for hundreds of years, if not longer. But in the past decade, the disease has seen an uptick in cases, leading to a “silent epidemic,” according to the Centers for Disease Control and Prevention. Because of increasing development in arid climates where the fungus lives, as well as better testing and diagnosis, the infection’s incidence has skyrocketed, reaching 22,500 cases in 2011, up from 2,265 in 1998. But with many cases going unreported, experts believe as many as 150,000 people may be sickened annually.

Medically known as coccidioidomycosis, or cocci for short, the lung infection is caused by a fungus in the mushroom family that begins life as a tiny, single-celled spore. Even a light breeze can carry the spores aloft, and when inhaled, they can penetrate deep inside the airways of the lungs.

While about 65 percent of infections don’t cause any symptoms, the vast majority of those who do get sick develop pneumonia-like symptoms, such as cough, chest pain, shortness of breath, headaches, fatigue and fever. In about 400 cases documented each year in Arizona, spores spread beyond the lungs and can eat away at bones, joints, the liver or spleen, and the nervous system. They can cause meningitis infections in the brain, leading to cognitive impairment, paralysis or death. About 160 patients die from the infection each year, says John Galgiani, director of the Valley Fever Center for Excellence at the University of Arizona in Tucson.

'It was very scary'

When doctors examined Shibendra Das in 2013, they thought he had advanced lung cancer. The Phoenix resident had been coughing uncontrollably for weeks. Imaging scans revealed he had a 1.3-centimeter lesion in his right lung and enlarged lymph nodes, suggesting a malignancy had metastasized. “It was very scary,” says the 79-year-old anesthesiologist, who got a second opinion and discovered he had valley fever. After being treated with antifungal drugs, Das feels better and has few residual symptoms. But he knows that once the fungal parasites take root inside the body, patients then harbor them for life. “The lesions on my lungs will take a long time to completely heal,” he says.

The cocci fungus flourishes in southwestern regions with dry weather and sandy soils, such as Arizona, Utah, New Mexico, parts of Texas and California’s San Joaquin Valley, which gave valley fever its name after a major outbreak there in 1930. Any disturbance in the soil — construction, oil exploration, archaeological digs, earthquakes or high winds — can stir up a cloud of spores.

However, no one is sure which environments the fungus favors. A site may become more or less hospitable to the spores as temperatures, moisture levels and soil ecology change.

Hoping to pinpoint the areas with fungus-friendly soils so residents can take extra precautions, physicists and geologists at California State University, Bakersfield, led by physicist Jorge Talamantes Rivera, are using satellite images to match features between sites where the fungus is endemic and other locations at risk for harboring spores. For example, they are comparing moisture content, soil types, crops and other vegetation in the Central Valley’s Kern County with environmental features at Sharktooth Hill, a popular fossil site outside Bakersfield where cocci spores are known to have caused illness.

If a strong link can be made between the fungus and local environmental conditions, Talamantes says the satellite maps will help people avoid exposure. At a site that’s suspected of harboring the fungus, or has the same environmental features as known contaminated sites, workers and researchers would then know to wear fine-dust masks or wet the soil before digging.

[This article originally appeared in print as "Valley Fever: The Hidden Epidemic."]