The Second Coming of Polio?

After an outbreak reminiscent of the early 1950s, neurologists worry about what's coming this summer. 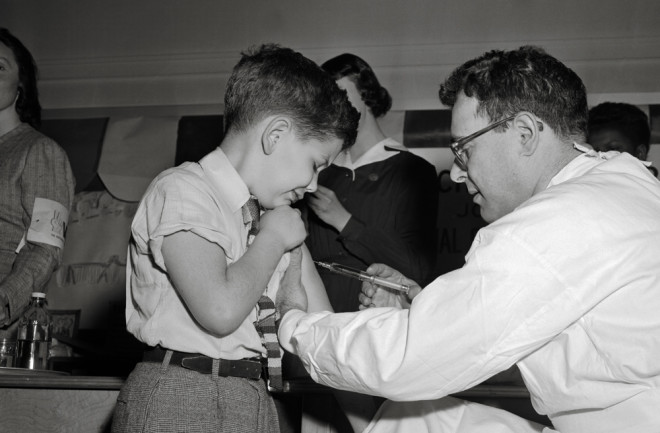 A child receives the polio vaccine at a school in New York in 1954. In the summer of 2014, an outbreak of polio-like paralysis affected over 100 children in 34 states in the U.S. (Credit: Bettmann/Corbis)

An outbreak in late 2014 of polio-like paralysis in children, unlike any experienced in North America in more than half a century, has physicians on edge about what this summer and fall may bring.

“Neurologists have been really unnerved by what we’ve seen,” says Keith Van Haren, a physician at Lucile Packard Children’s Hospital who has been treating cases in California. “We’re all really hoping it disappears, but the most likely outcome is that this will come back.”

Looking all but identical to classic poliomyelitis but caused by something other than the poliovirus, the illness — formally named acute flaccid myelitis — usually strikes a week or two after a patient recovers from an apparently ordinary respiratory infection. Patients suddenly cannot move one or more limbs. Occasionally they lose the ability to breathe. An MRI reveals the same hallmark feature as classic polio: inflammation and death of nerve cells in the spinal cord.

Between August and December, the illness affected more than 100 children in 34 states, at an average age of 8, according to the U.S. Centers for Disease Control and Prevention. At least 13 more cases were reported in Canada during the same period.

Even those numbers, generated only by reports from physicians who thought to contact the CDC, are likely an undercount.

“In California, a quarter of our cases have been adults,” says Carol Glaser, a former medical officer with a branch of the California Department of Public Health. “I’m really concerned that people think this can only happen in kids.”

Jayden Broadway of Denver was one of dozens of children treated last fall for a polio-like illness. Many have not fully recovered. (Credit: Cyrus McCrimmon/Denver Post/Getty Images)

Two-thirds of the children counted by the CDC have shown some improvement, but only two have fully recovered, and one-third showed no improvement whatsoever. Some of those children remain on ventilators. Reports from doctors treating the illness began trickling into Glaser’s office as early as June 2012. California eventually counted nearly 50 cases there over the next two years. “I remember vividly one neurologist saying to me, ‘I’ve never seen this here before.

I trained in India. I saw polio in India. This looks like polio,’ ” Glaser says. “There are clearly very strong similarities.”

Since the poliovirus doesn’t cause the disease, the polio vaccine won’t prevent it. Researchers suspect that another virus, enterovirus D68 (EV-D68), is the culprit because a widespread outbreak of upper respiratory illnesses associated with EV-D68 hit North America around the same time as this new polio-like illness. Sophisticated genetic research has also identified EV-D68 in many, but not all, of affected children’s respiratory secretions.

The illness is presumably spread, like the cold virus, through coughing and physical contact. Doctors do not yet know how easily it is transmitted or what proportion of infected people develop the polio-like symptoms — mysteries Glaser will be working to investigate in her new position at health care giant Kaiser Permanente.

"Looking almost identical to classic poliomyelitis but caused by something other than the poliovirus, the illness usually strikes a week or two after a patient recovers from an apparently ordinary respiratory infection."

“I do think we should be prepared,” Nath says. He acknowledges the uncertainties about whether EV-D68 is the cause of acute flaccid myelitis, and even whether it will come back in another outbreak later this year. Still, he says, “We should be thinking of vaccines. Even assuming we have zero cases in 2015 wouldn’t mean we wasted the money. It could come back another year. Once the organism has shown its ugly head, you have to be prepared for it to come back.”

But James J. Sejvar, the neuroepidemiologist at the CDC who has been tracking the outbreak and issuing alerts about it, says that beginning work now on a vaccine would be premature.

“We have this strong temporal association with the EV-D68, but at this point we don’t have a smoking gun to confidently say there is cause and effect,” says Sejvar. Proof would come from finding the virus in affected children’s cerebrospinal fluid, something nobody has seen yet. “Unless you’re certain what is causing the illness,” he says, “it’s difficult to take specific actions.”

Sejvar also takes issue with predictions that the outbreak will return this year during the late summer and fall (the same seasonal pattern long observed, but never fully explained, in both polio and EV-D68).

“It’s premature to expect that,” he says. “It’s not unusual to have a large outbreak of an enterovirus and then you don’t see it for several years.” Even so, he adds, “We’re certainly going to be vigilant and continue to monitor to see if something happens this year.”

Glaser hopes to find cases that doctors have not yet reported to the states or to the CDC — and learn more about who is most at risk — by mining Kaiser Permanente’s large patient database.

“We have a serious syndrome going on,” she says. While acknowledging the danger of speculation when so much remains unknown, she offers a cautious estimate: “I don’t think there will be thousands of cases, but I do suspect it will be more [than last year]. To expect less would be foolish.”