The scions of Shem?

The media is reporting rather breathlessly a new find out of Arabia which seems to push much further back the presence of anatomically modern humans in this region (more accurately, the archaeology was so sparse that assessments of human habitation seem to have been made in a vacuum due to absence of evidence). Here is the major objection:

This idea is at odds with a proposal advanced by Richard Klein, a paleoanthropologist at Stanford University, that the emergence of some social or behavioral advantage — like the perfection of the faculty for language — was required for modern humans to overcome the surrounding human groups. Some kind of barrier had to be surmounted, it seems, or modern humans could have walked out of Africa 200,000 years ago. Dr. Klein said that the Uerpmann team’s case for an earlier out-of-Africa expansion was “provocative, but in the absence of human remains, it’s not compelling.” The stone tools of this era are all much alike, and it is hard to tell whether early modern humans or Neanderthals made them. At the sites of Skhul and Qafzeh in what is now Israel, early modern humans were present around 100,000 years ago and Neanderthals at 60,000 years, but archaeologists cannot distinguish their stone tools, Dr. Klein said. A warmer and wetter climate around this time let modern humans get as far as Israel but apparently no farther, and the new findings from Jebel Faya could represent a second limited excursion. But in this case, it is Africa that is expanding, or at least the African ecological zone, and not modern humans, Dr. Klein said. “The key issue is whether this is an early out-of-Africa movement, but if so, it was far more limited than the modern human expansion to Eurasia roughly 45,000 years ago,” he said. 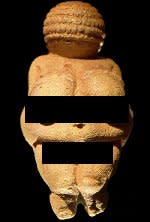 The Dawn of Human Culture

Richard Klein argued that modern humans as we understand them today, protean and highly cultural creatures, are a product of a biological change which reordered our cognitive faculties. Klein pinpoints this change to the "Great Leap Forward"

~50,000 years ago. But, there is a large gap in time between anatomically modern humans, who were resident in Africa nearly ~200,000 years ago, and behaviorally modern humans, who engage in the symbolic cultural production which we perceive to be the hallmarks of humanity. As against this particular model there have always been "gradualists," who argue that there was no discontinuous biological change which resulted in the shift toward hyperactive cultural production. Stephen Oppenheimer makes the case for this in his book The Real Eve

. Oppenheimer suggests that there was a gradual and cumulative cultural evolution. He argues that a proper analogy might be the rate of cultural change in the 20th century vs. than in the 17th century. Obviously we know that genetic evolution can not explain most of the difference in rate of change across the two eras, but looking at archaeological remains from the two periods would make clear their stark differences to a third party observer to the point where I can't help but think a biological rationale would seem plausible without any other information.

I have no particular brief for either position in this post. I assume that both the biological and cultural models are too extreme now. The long term persistence of the Oldowan

culture in much of the world implies to me that there may have been a biological chasm between hominin groups, and that the Oldowan "culture" was somehow biologically encoded. And yet I am not convinced that the gap between our Neandertal and neo-African ancestors was as great as Klein would have us believe. So now to the paper. First, let's look at the abstract

The timing of the dispersal of anatomically modern humans (AMH) out of Africa is a fundamental question in human evolutionary studies. Existing data suggest a rapid coastal exodus via the Indian Ocean rim around 60,000 years ago. We present evidence from Jebel Faya, United Arab Emirates, demonstrating human presence in eastern Arabia during the last interglacial. The tool kit found at Jebel Faya has affinities to the late Middle Stone Age in northeast Africa, indicating that technological innovation was not necessary to facilitate migration into Arabia. Instead, we propose that low eustatic sea level and increased rainfall during the transition between marine isotope stages 6 and 5 allowed humans to populate Arabia. This evidence implies that AMH may have been present in South Asia before the Toba eruption

Some dates to peg into your framework: - Anatomically modern humans emerged in Africa in the interval of 100-200,000 years before the present - Modern humans came to dominance in Europe 30-40,000 years ago - Modern humans arrived in Australia and New Guinea 45-60,000 years ago In the early 2000s both Y and mtDNA suggested the possibility of a "northern" (via the Levant and through Central Asia) and "southern" (a coastal Indian Ocean route to Southeast Asia and Australia) route of modern humans out of Africa and to the rest of the world. I don't think this model is easily supported by the data any longer. Rather, it seems more plausible that there was one proto-neo-African population which then divided into a "western" and "eastern" branch (the latter being subdivided between the progenitors of East Asians & Amerindians, Oceanians, and a mostly absorbed substrate in South and Southeast Asia, of whom the Andaman Islanders are relics). Despite the debates about the details of the branching pattern, a relatively late radiation of modern humans out of Africa seems to have been a good consensus position until recently. There were always anomalies, such as the Skhul and Qafzeh hominins

in Israel, who seem to predate the neo-African radiation by ~50,000 years. But it was easy to argue that this was a "false start" of anatomically modern humans who went extinct, in part because they lacked the cultural fluidity of the "second wave" which came out of Africa. Another major milestone in the big picture of recent human evolution was the Toba explosion

. This massive catastrophe occurred ~75,000 years ago, and has been posited as a major force behind the genetic bottleneck of modern humans. The postdating of the radiation of H. sapiens sapiens in relation to this event was suggestive to many that this climatic and geological shock was a major precondition for the emergence of behaviorally modern humans. With all that in mind, the current set of results shakes up an already destabilized orthodoxy. The dates for the current finds in Arabia are 127, 123, and 95 thousand years before the present, with errors on the order of 10,000 years. Unless there's a major fault in their assumptions here this seems to confirm a second locus of modern humans besides the Skhul and Qafzeh hominids. Here's the map: 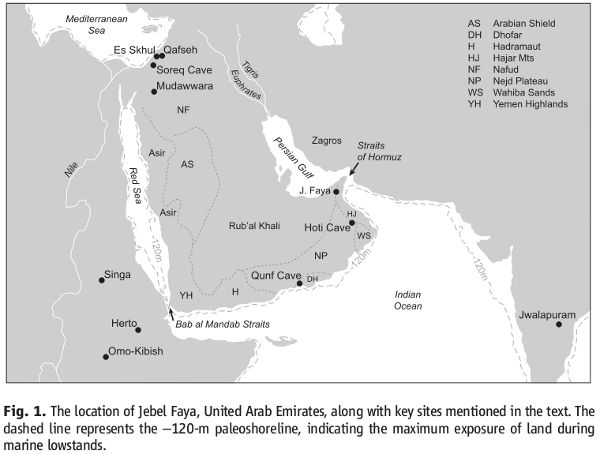 As you can see the coastline shifted a great deal over the Pleistocene due to the fluctuation of the glaciers. I'll get into the paleoclimate later, but how do they know these were modern humans? The answer is in the tools:

All things equal the objection of Klein and other paleonathropologists that relying on tools alone is problematic seems a valid objection to me. But, all things are not equal. Which I will get to.... From what I can gather the main hypothesis being presented here is that there are two correlated patterns which blocked the expansion of anatomically modern humans from Africa to the rest of the world: extreme aridity in an already arid region, and higher sea levels. So the key was to 1) move across the water barrier during phases of low sea level, and, 2) persist until more clement regimes allowed for a population expansion. Here's a reediting of figure 3 to illustrate the synchrony of parameters: 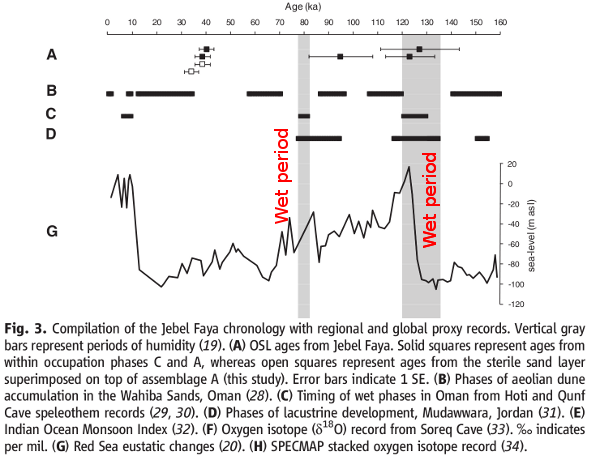 So how plausible is this? I think very plausible. Since I don't know much about bones and tools I'm relying on the genetic evidence. In my post We were all Africans…before the intermission

I outline a model whereby anatomically modern humans exited Africa well before the "Great Leap Forward" 50,000 years ago, but were bottled up in southwest Asia for much of that period. Even today the southern portions of Arabia are part of the Afrotropic ecozone

. In other words, their flora and fauna bear greater resembles to that of Africa than Eurasia. Can we then outline a plausible narrative which integrates these findings with the genetics? Yes. 100-150,000 years ago anatomically modern humans engaged in a range expansion, and pushed their way out of Africa into ecologically suitable zones in southwest Asia. Because of climatic fluctuations, in particular, the extreme aridity of much of the Pleistocene which was even more extreme than today in this region, these populations experienced multiple population crashes and expansions. It may be that there were many localized or regional extinctions. During this long sojourn in the inhospitable margin between Eurasia and Africa the anatomically modern humans, the neo-Africans, exchanged genes with similarly marginal Eurasian hominins, a branch of Neandertals. This zone was not ecologically optimal for either African or Eurasian descendants of H. erectus, and so the low population densities allowed for there to be a great divergence in their genetic character over the eons. The anatomically modern humans of the Levant and Arabia during the later Pleistocene may be equivalent to the Tuareg of today, a Saharan people who exhibit resemblances to peoples north of the Sahara, with some admixture with southerners, but not numerous enough to be major vectors mediating gene flow themselves. And then ~50,000 years ago something happened. The neo-Africans of southwest Asia, who had a non-trivial element of Eurasian hominin ancestry, entered in a period unprecedented range expansion, and seem to have absorbed or exterminated other non-African populations. Additionally, they pushed the frontiers of human habitation to Siberia, the New World, and Oceania. Of course that could be all wrong. Who knows? Citation: